Party where the Rock Stars do, Presented by 94.3 KILO at Sunshine Studios Live

"Listen to the lyrics, they're going to make you feel something... " - Mixi

That something is the essence of Stitched Up Heart - a band built around the strength that comes from realizing we are the only ones that control our lives, and focused on the hope that reminds us there is always light at the end of the darkest tunnel. It's something heavy and powerful, jarring the album's epic closing track "I Can't Breathe" from a piano-paced ballad that would do Lady Gaga proud, to a metallic onslaught of drop-tuned guitars that is sure to see the band sharing a stage with the hardest of their hard rock peers. And it is something undeniable, Mixi's voice taking flight amidst anthems of self-awareness that bridge the unrelenting confidence of In This Moment's Maria Brink and the soulful transcendence of Adele.

"When I formed this band I was depressed and going through heartbreak. The name is supposed to give people strength and courage," professes the frontwoman in a warm and certain tone. "We all go through things that make us think we can't go further but, especially when times are bad, I want people to see that time will pass and it will get better. The hopeful lyrics on this record are on purpose - I've been living in the dark for too long, it's time to come into the light. You need to pick yourself up because nobody is going to do that for you. There are some sick people out there, but there is beauty in everyone - and you need to love yourself before you can stitch that heart back up."

"Finally Free" thrust the band into the national spotlight in early 2016, exorcising its demons and riding breakthrough success on SiriusXM Octane into the Top 20 at Active Rock radio. "That song is sentimental to me, it's an eye opener because it's when I realized that there was a light at the end of the tunnel and that life is really beautiful," she offers. But the demon returns on "Monster," a blitzkrieg of stabbing guitars and shrill effects that opens with Mixi declaring, "Now don't you make me, make me go crazy..." We're all a little crazy, but Mixi felt a little more possessed as usual when the band penned the monster track.

"The studio where we wrote 'Monster' was a pretty creepy place," she details, "A black cat gave birth to two albino cats there, there were spell books on the shelves, it had a crazy energy and I almost felt possessed, the words coming through and speaking through me... It might have also been that I was drinking a lot of Monster Energy Drink that day, but it felt like a beast came out!"

From the bombastic, dark and seedy tribute to their Los Angeles home that is "City of Angels," into the great beyond via the cinematic super nova that is "Event Horizon" - the metaphoric closing of one door and the opening of a new chapter - the debut album oozes with a voice as powerful as the music, and music as compelling as the voice it carries. "Everyone has felt like they don't have anybody, I want to reach out to anyone feeling that way and let them know that they aren't alone," says Mixi of Never Alone.

Whether we're ducking and dodging life's often cruel barrage, embracing a moment of calm at the center of a storm, or simply looking for the strength to make it through the day, Stitched Up Heart have delivered the soundtrack for a life worth living... Turn it up, because we are never alone. 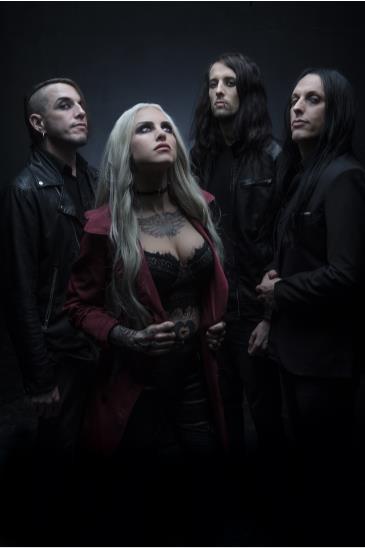