Strike Iron, Smoota (of TV on The Radio), The Grease Traps

Brace yourself for an impressive one-two-three punch lineup that is sure to satisfy your soul and make you tingle all over.  Starting the night off we have the sensual DIY alt-soul grooves of NYC's crooner, Smoota, who's played some tantalizing trombone for TV on the Radio, Run The Jewels and Sharon Jones among others.  Hailing from Oakland, The Grease Traps bring the heat with a powerhouse set of stirring soul and raucous rare funk featuring a tight rhythm section, full horns, and sizzling vocals from all-around fly dude, the Gata.  To cap the night off, witness the 12-piece juggernaut that is StrikeIron, the Bay Area's premier afro-beat sensation who lays down high-energy grooves thick with hypnotic percussion, heavy horns, African dance, and funky rhythms. Born out of the ashes of the international Afrobeat act Albino, Strike Iron brings sexy, socially charged dance music into the 21st century.

Fronted by multi-instrumentalist, composer and lead vocalist Michael Bello (Phil Lesh and Friends, Ernest Ranglin), and featuring a slew of The Bay's consummate professionals, Strike Iron is an original dance band unlike any other.
http://www.strikeironband.com/
https://m.facebook.com/albinobandpage/
https://www.reverbnation.com/albinoafrobeat
https://m.youtube.com/channel/UC4fx9qJ299WN27pob65XpPA

**SMOOTA**
Recorded over several years in his basement studio in Brooklyn, Smoota's second LP will continue his unique musical exploration of sexual desire and its complex intersection with love. Written and performed almost entirely by himself, Smoota’s follow-up to his 2013 debut, FETISHES will continue his one-of-a-kind blend of honesty, humor and wordplay to shine a light on the beautiful and often mind-boggling displays of lust, devotion, happiness and pain we employ to both fall in love and get it on.
An in-demand musician in New York, Smoota has toured for years with art rock legends TV On The Radio. He has also recorded and performed with a wide variety of artists, including hip hop sensations Run The Jewels, rock legend Steven Tyler, EDM phenoms Pretty Lights and Griz, New Orleans superstar Aaron Neville, indie icon Sufjan Stevens, and soul queen Sharon Jones.
For his own music, Smoota draws inspiration from his deep collection of soul, funk, disco and R&B records. Filled with sounds from rare 70s and 80s synths and drum machines, his sensual and funky grooves are a fresh take on the slow jams and dance classics of sex crooners like Marvin Gaye, Serge Gainsbourg, Willie Hutch and Smokey Robinson.But while sonically the music pulls from the heyday of groovy music, lyrically Smoota writes from 2018 and beyond, addressing ideas more often examined in literature and European art films than in music. His new album will address the polyamorous urge, happy S&M relationships, taboo lust for one’s in-laws, the complexity of the female orgasm, the connection between masturbation and intercourse and more...
https://smoota.com/
https://www.instagram.com/smoota/
https://twitter.com/SmootaWantsYou
https://www.facebook.com/SmootaMusic/
https://soundcloud.com/smoota
https://open.spotify.com/artist/07JnqRXmg6WO5A0vZ4koae?si=rhYmVj0zRZiVX3kQPNEQZw
PRESS
"Hyper-sexed sensual alt-soul grooves."– Time Out NY

"How the libido sounds." – The San Diego Reader

"Combines the slinky DIY funk grooves of Shuggie Otiswith the offbeat, trippy, psychedelic stoner charm of James Pants, all toppedoff with a sly pervy streak that winks toward Serge Gainsbourg and theP-Funk mob.”  – Other Music 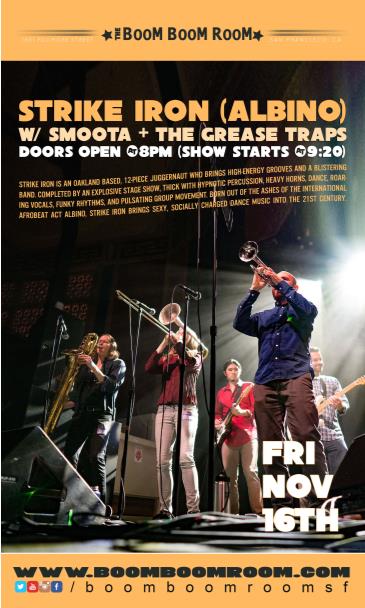