Sun Ra was one of the greatest and least known jazz artists of the last four decades. Composer, bandleader, pianist, poet and Afro-Futurist philosopher, he founded his Arkestra to take jazz into unexplored territories – his style drawing simultaneously on black vaudeville, modern dance, Egyptian cosmology, Eastern philosophy, surrealism, kitsch, and the Bible.

The Arkestra performs today led by 97-year young alto saxophonist and long-time Ra collaborator Marshall Allen. The mischievous brass blasts and the grooves keep rolling, as the big band – fully dressed, as usual, in space capes with a hint of Ancient Egypt – takes off once again in a joyous burst of tightly organised madness.

Urban Shaman Attack is a music group that plays American Futurism from Wilmington, DE. We are largely influenced by Miles Davis, Stockhausen, Sun Ra Solar Arkestra, Acid Mothers Temple, and the Grateful Dead's drums / space and deep improvisations.
Urban Shaman Attack can be found on Spotify, Apple Music, iTunes, and most digital platforms. USA plays American Futurism there, and at a venue or festival near you. 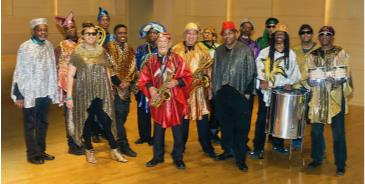