The year 1958 saw two important mile-stones in the space race. First, the UnitedStates successfully launched the Explorer 1satellite from Cape Canaveral, Florida, responding to the Soviet Union's earlier launch· ·-of Sputnik 1. Second, alto saxophonist Marshall Allen joined forces with Sun Ra. Now, some may see an imbalance between a scientific event of major consequence and a then-obscure musical outfit gaining a new member, but those people are most likely unaware that the Sun Ra Arkestra was and remains the most cosmic band that ever was-and that its leader in1914 had journeyed to our planet from the mysterious, faraway ringed world of Saturn, settling eventually in the place Earthlings call Chicago, where he proceeded to communicate via a sound called jazz.

Or at least that's what Sun Ra told anyone willing to listen, and as Allen, now 89, says,"Who was I to doubt it? If he said he was from Saturn, maybe I'm from somewhere else too." Regardless of his origin, Sun Ra, who departed this tiny blue dot for parts unknown in 1993, left his Arkestra in good hands. Multi-instrumentalist and bandleaderAllen may not possess the flamboyant persona of his band's piano-playing f o u n d e r -Who possibly could?-or the complex philosophical outlook ("Sometimes I under-stood him and sometimes I didn't, but I gave him the benefit of the doubt," Allen says),but 55 years after entering Sun Ra's orbit, he is determined to carry on the legacy. "He was a creative person who wrote beautiful-music," Allen says. "I was always asking him, 'Why do you want to do this and why do you want to do that?' And he said that we could accomplish anything. So after he passed I said I can't lose this opportunity."

Today, the group may number anywhere from 10 pieces up to 25, often including dancers and singers as well as virtuosic musicians, all of them resplendently costumed and pumped full of nonstop animation. They're a sight to behold, with? sound like no other. At Jazz at Lincoln Center, they will be accompanied by the live, real-time drawing of visual artist Michael Arthur.

An Arkestra gig is unpredictable, multi-hued, and quite often riotous-at times they seem on the verge of chaos. Allen cultivates that sensation, but says that the ensemble's guiding principles are actually"discipline and precision," two traits SunRa passed down to his charges. When the' Arkestra descends upon Jazz at LincolnCenter's The Allen Room (how appropriate)for its first appearance, anything is likely to happen. All that Allen will hint is, "We got a lot of numbers, so we'll just do them."

But there are some things that audiences will surely witness. First and foremost is a band that swings like crazy. As far off into the ionosphere as the Arkestra might venture, they never lose that pulse; for all of their serious experimentation, they knowhow to have fun. "This is a band that plays music using different sounds, and it's got spirit, and that's what you get," says Allen."We play the old and the new and the in-between. We play a little of the music that's like the big bands and some blues, and we play a little of the music that everybody's doing, and we'll play some space music. So it's like a lesson, but it's creative music."

Today's Arkestra still performs Sun Ra's compositions and arrangements, augmented by Allen's. What pleases him the most is that the Arkestra's appeal has actually broadened with time-this group that was once considered so enigmatic and weird that even some hardcore jazz fanatics couldn't fathom what they were doing, now boasts a young, open-minded fan base. "Sun Ra always said we were music for the21st century," says Allen. "Now, wherever we play, they seem to catch on." As one of the Arkestra's signature themes long ago put it, it appears that the masses finally agree that "Space is the place." 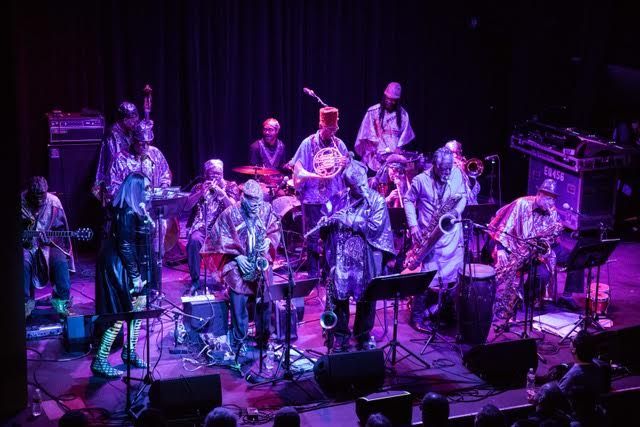