AVALON welcomes back Super8 & Tab for an exclusive four-hour set alongside LA residents Calinovas and Revkin on June 23.

Hailing from Finland, Super8 & Tab are taking the trance sound to the next level. After teaming up in 2005, their breakthrough singles like ‘First Aid’ and ‘Helsinki Scorchin’ made for a gratifying introduction to the trance community. Since then, Super8 & Tab releases have been major, garnering support by iconic trance artists like Armin van Buuren, Paul Van Dyke, Ferry Corsten and Above & Beyond. Initially starting out on Anjunabeats label, the duo eventually merged themselves to Armin’s family called Armada Music Label, captivating a different kind of audience. This transition lead to their Part 1 album called ‘Reformation’, the first release on Armada Music. This clear reflection of their creative process and inspiration captured fans in many ways and now they’re gearing up to show AVALON’s crowd what they can do.

Rounding up for support is two of AVALON’s residents CaliNovas and Revkin. Both acts are known to be the favorite for LA locals, playing the best of trance. CaliNovas has been welcomed back numerous of times opening up for big names like Felix Cartel, Dubvision and Dubfire. Revkin will be introducing us to his take of trance with hints of techno groove into the mix.

With Super8 & Tab gifting us with a four hour set, you do not want to miss your chance this summer at AVALON with performances by CaliNovas, Revkin, and Super8 & Tab on June 23rd. 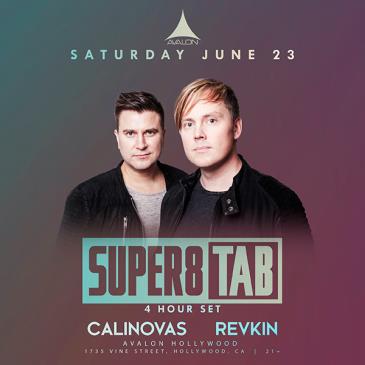