Tab Benoit is a Grammy nominated singer, songwriter and guitarist who has built a remarkable 30+ year career on the foundation of his gritty and soulful Delta swamp blues, acquiring a devoted legion of fans along the way, as well as 5 Blues Music Awards, including BB King Entertainer of the Year (twice) and an induction into The Louisiana Music Hall of Fame. He has recorded and/or performed with Junior Wells, George Porter Jr, Dr. John, Willie Nelson, Big Chief Monk Boudreaux, Billy Joe Shaver, Maria Muldaur, James Cotton, Cyril Neville, Kenny Aronoff, Allen Toussaint, Kim Wilson, Jimmy Thackery, Charlie Musslewhite, Kenny Neal, Chris Layton, Ivan Neville, Jimmy Hall, Jim Lauderdale, Anders Osborne, and Alvin Youngblood Hart to name a few. Tab's accomplishments as a musician are matched only by his devotion to the environmental health of his native Louisiana wetlands. Benoit is the founder and driving force behind Voice of the Wetlands, an organization working to preserve the coastal waters of his home state.

Big Chief Monk Boudreaux (HBO's Treme) incorporates African Rhythms and Mardi Gras Chants into his own original style of Rhythm and Blues. Boudreaux is the Big Chief of the Golden Eagles, a legendary Mardi Gras Indian tribe. He is widely known for his long-time collaboration with Big Chief Bo Dollis in The Wild Magnolias. In 2016, Boudreaux received a National Endowment for the Arts National Heritage Fellowship in Washington, DC.

Johnny Sansone goes deep into Bayou Blues and Zydeco with his roof shaking vocals, harmonica and accordion. Sansone has won numerous awards in the Crescent City, including multiple categories for Offbeat magazine's annual "Best of the Beat” competition.

Rounding out the Jam is Waylon Thibodeaux on vocals and fiddle.  Born in Louisiana’s ‘Bayou Country’ just a few miles southwest of New Orleans, Houma native Waylon Thibodeaux has been dubbed “Louisiana’s Rockin Fiddler”. His rollicking, Cajun and zydeco rhythms never fail to serve up a good helping of spicy, high-energy Louisiana fun.

SAMANTHA FISH - “That was my mission on this album: To really set these songs up so that they have a life of their own,” says Samantha Fish about Kill or Be Kind, her sixth solo album and her debut on Rounder Records. “Strong messages from the heart – that’s what I really set out for.” Indeed, what comes across immediately on hearing the album is the extraordinary level of songcraft on its eleven tracks, the way these songs are so smartly put together to deliver a potent emotional impact. 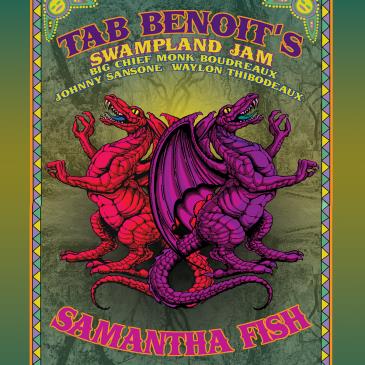