TESTAMENT - The Bay Strikes Back Tour

Postponed from October 6, 2021, original tickets will be honored.

One of the most influential thrash acts to emerge from the Bay Area in Metallica's wake, Testament, who initially operated under the moniker Legacy, helped to lead the genre's second wave in the late 1980s. Part of the thrash metal "big eight," which also includes Metallica, Megadeth, Slayer, Anthrax, Exodus, Overkill, and Death Angel, the band found mainstream success in 1988 with the release of their sophomore outing, The New Order. Despite enduring multiple personnel changes over the years -- guitarist Eric Peterson has remained the group's sole constant member -- Testament have remained active for decades and experienced a resurgence in popularity in the 2010s with acclaimed efforts like Dark Roots of Earth (2012), Brotherhood of the Snake (2016), and Titans of Creation (2020).

Influenced by the then-emerging Bay Area thrash metal scene, vocalist Steve Souza, guitarists Eric Peterson and Derrick Ramirez, bassist Greg Christian, and drummer Louie Clemente formed Legacy in late 1983. But it wasn't until the arrival of lead guitarist Alex Skolnick and a name change to Testament two years later that the band's Metallica-inspired thrash metal began distinguishing them from less-refined peers such as Forbidden and Vio-Lence. By 1986, the group were attracting record company attention, but they were handed a severe blow when Souza abruptly quit to join original Bay Area scene legends Exodus. Ironically, however, his departure would prove a godsend, as the band soon drafted a significantly more versatile (and downright intimidating) replacement in Chuck Billy. His greater melodic talents and inimitable, bowl-shaking growl would better complement Testament's increasing diversity and mastery of melodic crunch.

The bandmembers promised to start releasing music more frequently, and made good on their word with another new studio album in 2016, Brotherhood of the Snake. Named for an ancient secret society, it saw them return to their thrash roots with some of their fastest material in ages, and featured the return to the fold of bassist Steve DiGiorgio for the first time in 15 years. The 2020 follow-up, Titans of Creation, their 13th studio album, was co-produced by Juan Urteaga and tackled mythological themes. It marked the first time since 1992's The Ritual that the band had recorded two albums in a row with the same lineup.

Bay Area thrash heroes who gained fame and influence for their highly aggressive musical and lyrical approach, Exodus emerged in the early 1980s alongside West Coast contemporaries Testament, Possessed, Death Angel, and Metallica -- the latter outfit's longtime six-stringer Kirk Hammett began his career in Exodus. Pioneers of the scene, the band found success with their influential 1985 debut, Bonded in Blood, and their similarly acclaimed 1989 third effort, Fabulous Disaster. Exodus' popularity waned as the grunge scene took over in the early '90s, forcing them to cease operations in 1995. They officially re-formed in 2001 with guitarist Gary Holt, the group's longest-tenured member, leading the charge, and went on to release a string of well-received LPs, with highlights arriving via 2005's Shovel Headed Kill Machine and 2014's Blood In, Blood Out, the latter of which proved to be the veteran band's highest-charting album to date.

San Francisco's Death Angel are a product of the bustling Bay Area thrash metal scene of the '80s. Combining serious guitar crunch and speed with technical expertise, they create complex thrash filled with time changes and tricky arrangements, and are considered to be one of the "big eight" of the genre, alongside Metallica, Megadeth, Slayer, Anthrax, Testament, Exodus, and Overkill. Emerging in 1982, the group found underground success with their first two albums -- 1987's The Ultra-Violence and 1988's Frolic Through the Park -- before dipping their feet into the mainstream with their 1989 major-label debut Act III. They ceased operations in the early '90s, but re-formed in 2001 and continued to tour and record, releasing neck-snapping LP's like The Art of Dying (2004), The Dream Calls for Blood (2013), and Humanicide (2019), with guitarist Rob Cavestany serving as the only constant member.

Shortly after the release of Killing Season, bassist Pepa left the band, replaced by Sammy Diosdado, an active player in the Bay Area hardcore scene at the time. Just months later, drummer Galeon also left the group, leaving Cavestany the only remaining founding member. Galeon was replaced on tour with drummer Will Carroll and work began on 2010's full-length effort, Relentless Retribution. The group followed it in 2013 with The Dream Calls for Blood, which peaked at number 72 on the Billboard 200. In May 2016 they dropped their hard-hitting eighth studio long-player The Evil Divide, followed in 2019 by the uncompromising Humanicide. The latter album's title track was nominated for a Grammy for Best Metal Performance.


♦ VENUE COVID PROTOCOL ♦
** These guidelines are subject to change. 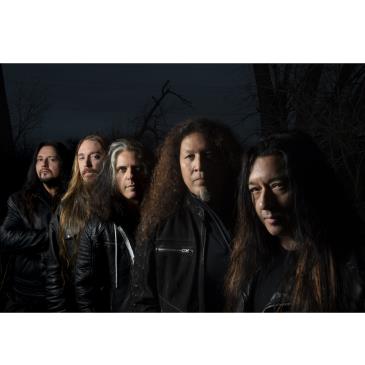