An Evening With Testament, Sepultura, and Prong

Testament is a Bay Area-based group credited as one of the most popular thrasher bands of all time. The group formed as Legacy in 1983, but changed their name two years later and released their debut album, “The Legacy” in 1987. Over the band’s more than three decades as a group they have released over a dozen albums, one of the most successful being 2012’s “Dark Roots of Earth.” The album reached the top spot on the Billboard Rock Albums, Hard Rock Albums and Independent Albums charts. It also secured the No. 12 spot on the Billboard 200 chart. This year, Testament released another successful album, “Brotherhood Of The Snake,” which also charted on the Billboard 200 chart.

General Admission, Standing. Livewire is an “open floor” venue to allow artists to connect with their audiences during performance.

If you are interested in Bottle Service in a VIP Booth, please visit our VIP Page (http://livewireaz.com/vip).

No service fees for tickets purchased with cash at the Livewire Box Office. All tickets subject to the facility fee. Prices subject to change without notice. 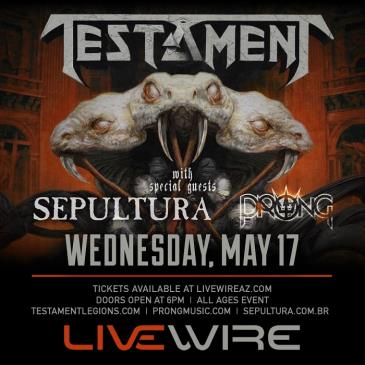