Since forming in high school, Brisbane band The Goon Sax—the trio of Riley Jones, Louis Forster, and James Harrison, best friends who take turns writing, singing, and playing each instrument—have been celebrated for their unpretentious, kinetic homemade pop. Mirror ll, The Goon Sax’s third album and first for Matador, is something else entirely: a new beginning, a multi-dimensional eclectic journey of musical craftsmanship that moves from disco to folk to no wave skronk with staggering cohesion. Gone are the first-person insecurities of their school days—they’ve been made expansive, more universal, more weird.

On their debut album, 2016’s Up to Anything, it was their candid affection and scrappy instrumentation that drew praise; 2018’s We’re Not Talking was exalted for the same—their massive choruses, a sharpening of their craft, then with an addition of horns, strings, piano, and castanets to their guitar/bass/drums.

Mirror ll is the result of three years of writing, and some considerable time spent apart: Louis relocated to Berlin and worked at a cinema (he sings in German on the track “Bathwater”), Riley and James formed an angular post-punk band called Soot. All three experimented with abstract, atonal sounds before recapturing the essence of The Goon Sax: “pop melody,” Louis explains. https://thegoonsax.com/ 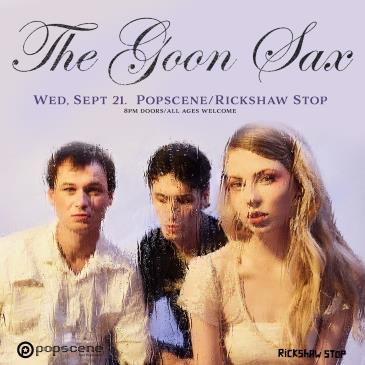