Eight men pick up shiny brass and drum instruments, lock into an unspoken groove and rotate genres like your favorite playlist shifting from funk, jazz and R&B to hip-hop, pop and beyond with fire, focus and fluidity. New Orleans-bred staple THE SOUL REBELS expand musical boundaries with an unwavering commitment to originality and innovation through genre-bending songs and performance collaborations with the likes of Katy Perry, Nas, Metallica, Big Freedia and G-Eazy.

On the heels of their new supergroup with The Wu Tang Clan, The Soul Rebels continue to expand their international reach touring four continents including Europe, Australia, China, South Korea and Japan. Their explosive stage presence has led to live collaborations with the likes of DMX, Robin Thicke, Macy Gray, Portugal. The Man, Robert Glasper, Pretty Lights, Macklemore & Ryan Lewis and Matisyahu. 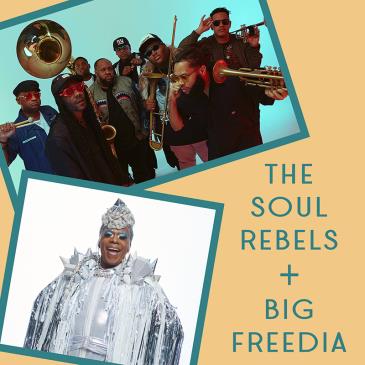