“My inner core has always been a wild child, and I always will be,” says striking Sounds vocalist Maja Ivarsson on the eve of her band’s sixth album, Things We Do For Love. “Songwriting is now my number one outlet to be rebellious and to say what I really wanna say.”

Considering The Sounds’ 22-year career, it’s no surprise that Things We Do For Love is a musically accomplished and sonically polished master class in electro-flecked, New Wave-y rock. What is shocking is the record’s harnessing of this hard-earned maturity and intra-band chemistry to the effervescent energy and escapist ‘80s hedonism of the quintet’s Platinum-selling 2002 debut Living in America.

Ironically, this alluring aural alchemy is in part a byproduct of the five members of The Sounds leading more settled lives than ever before – meaning that they’re now able to write about the rock ‘n’ roll rollercoaster that got them to this point with the clarity of stability.

“When I lived it, I couldn’t write about it – cuz then I was too fucked up to write about anything,” admits Ivarsson, who’s become a mom since The Sounds’ previous album, 2013’s Weekend. “Now I have the experience and the maturity to be able to write about it. But I had to live it to know it.”

Formed in Helsingborg, Sweden in 1998, The Sounds exploded worldwide with Living in America just four years later, propelled by singles “Seven Days a Week”, “Rock ‘n’ Roll”, and the title track (which hit #3 on the Swedish charts). Over the decade that followed they toured relentlessly (more than 200 shows in 2006 alone, the majority in the U.S.) – including runs with Foo Fighters, No Doubt, and The Strokes – and founded their own record label, before finally coming up for air after Weekend.

“I lived my life like I would release one record and I would die after that,” Ivarsson laughs over a Friday night glass of wine. “So for me to be here, still playing in the same band, is to me absolutely crazy – and so beautiful.”

An unusually close-knit unit, The Sounds have boasted an unchanged lineup since their teenage inception. Everything has always been split equally, and all have equal say. “A Swedish way of thinking – like a social democracy kind of band,” Ivarsson explains from her Malmö home, as drummer Fredrik Blond relaxes in the background.

While The Sounds’ personal lives are lately very different from their 2000s perma-tour, bright-lights blur (guitarist/keyboard player Jesper Anderberg also now a parent), their new sense of structure – and a renewed appreciation for The Sounds now that band life is juxtaposed against “normie” daily activities – has massively benefitted Things We Do For Love. The album’s 11 songs are effectively a “best-of” selection culled from many years of unusually disciplined and purposeful songwriting, scheduled around school runs and other everyday duties, coupled to the band’s enormous experience as writers and players.

With all members contributing to songwriting, but in permutations that have constantly fluctuated over the years (“We’re like five individuals with six different ideas,” Ivarsson quips), The Sounds have perpetually reinvigorated their creative process. Ivarsson says she’s recently found herself more involved in songwriting than she’s been since the band’s first two albums, this time often collaborating with Blond.

“Even after 22 years, it still feels different, whoever you’re writing with,” she mulls. “That is what’s keeping it fresh for each album.”

Things We Do For Love is indeed astonishingly fresh, as its triumphant, album-opening title track announces from the get-go. The very first sound on the record is Ivarsson’s assertive timbre imploring “It’s like a thousand pounds of dynamite / Exploding in my heart tonight” over stabbed slabs of synth, before the shimmying, shaker-sprinkled verse kicks in.

“There’s so many things that you do for love – as a mother, as a lover ... or for money. Whatever your love may be,” says Ivarsson. “And that can mess you up – or mess things up.”

The frenetic feel continues with the New Order-informed “Safe and Sound” (“I wanted it to sound like you’re in 5th gear in your car ... just driving into the moonlight,” says Ivarsson), before turning contemplative with the hugely atmospheric “Changes”

“For me, ‘Changes’ is about not only motherhood, but I’ve had such a crazy life. Like, I’ve done everything: I’ve done all the bad things; I’ve done all the good things,” Ivarsson recounts. “But to be able to change is always good.”

On Things We Do For Love The Sounds instinctively recapture their perky, punky best; conjuring images of smeared-neon nights on the town, falling in love (or lust), and the mutual tingle of things left unsaid, all with a sparkle of defiant optimism – forever reaching for something brighter and better than the socially-mandated status quo.

“I have a very vivid imagination, so in my head I always play out like a big, cinematic kinda movie theme,” Ivarsson explains of her lyric writing. “A full movie of two and a half hours of images and ideas.”

Things We Do For Love captures The Sounds at the very height of their collective powers: an intersection of young-at-heart verve and chiseled expertise that only happens once in a band’s lifetime, if at all.

“I’m in the most creative kind of zone right now,” Ivarsson concludes. “It’s pretty fucking amazing to have a career where people want you still.” 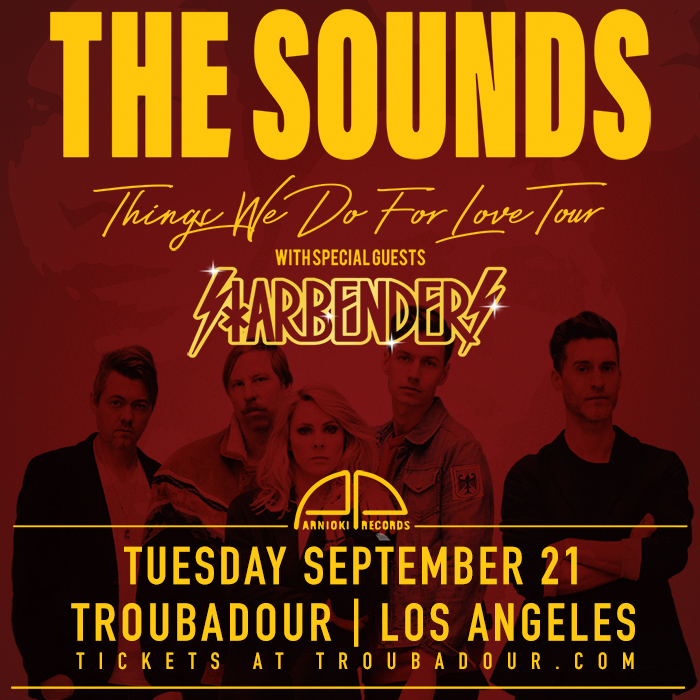