TheSwitters Hitters is an all-star band with the most in-demand musicians on theJazz, Funk and Hip-Hop scene. The band features  Robert“Sput” Searight (Ghost-Note,Kendrick Lamar) on drums/keys, NigelHall (Lettuce) on vocals/keys/bass, NateWerth (Snarky Puppy, Ghost-Note) on percussion, and Wil Blades on keys/drums/bass. The band of multi-instrumentalistsstarted as a means for the four members to get together, play tunes they love,and have fun switching around on different instruments. The impromptu vibe ofthe band keeps things loose and fun for both the band and audiences.

Grammy Award Winner Robert"Sput" Searight is a graduate of Booker T. Washington High School forthe Performing & Visual Arts and has worked in the music businessprofessionally for over 15 years. He has worked with some of the best artistsin the industry including Celine Dion, Bob Carlisle , Kirk Franklin, SnoopDogg, Erykah Badu, & Justin Timberlake, Jo Jo, Diddy Dirty Money, SnarkyPuppy ,Dogg Pound Gangsters, Charlie Wilson,Teddy Riley(GUY), and RaphealSaadig.... His talents has landed him various awards such as a Grammy, SoulTrain Award, NAACP Image Award and Dove Award, to name a few.

Soul provider Nigel Hall is in many ways anartist who needs no introduction. An in-demand sideman, he’s built a mightyfoundation of funk over the years onstage and in the studio with collaboratorsincluding the Warren Haynes Band, Jon Cleary, Soulive, Oteil Burbridge andRoosevelt Collier, Ledisi, the Soul Rebels, Lettuce and countless others.Legions of fans are already well in the know about Hall’s copious keyboardchops and powerful vocal style.

*GALAXE*
Nick Werth offers up an inspiring display of creativity with his solo project, GALAXE. While simultaneously juggling the producer/MC roles, live beats and positive mantras unite to form a unique blend of conscious HipHop and Electronica. To make matters more interesting, Nick delivers the GALAXE sound via Xylosynth: a futuristic beat machine with limitless possibilities.

"Nick Werth (Yak Attack) serves up hip hop-inspired beats with his solo project, Galaxe. What makes this incredibly unique is that he does it all live using a futuristic vibraphone. Based in the PacificNorthwest, the Galaxe sound is deeply inspired by nature and psychedelic experience, with nods to J Dilla and Flying Lotus. 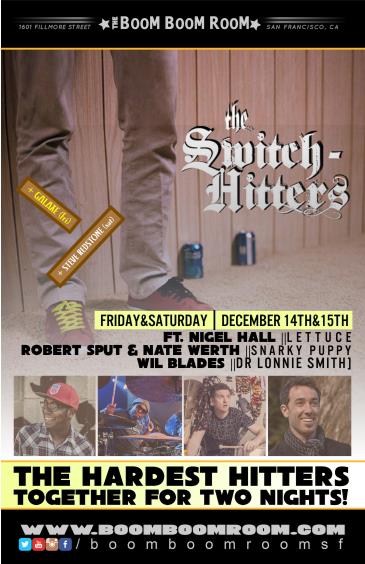