This is the rescheduled date for the TV GIRL show on May 9, 2020. Any tickets purchased for the old date is good for this date. If, however, you can't make this new date, please let us know by May 1, 2020, and we will refund your tickets. Thank you for your patience during this difficult time.

TV GIRL released “French Exit” in 2014 to shrugs. It would take exactly 6 and half years for their storied debut album to be re-evaluated as the singular slice of sickly-sweet-downer-pop that we all know and love today. To capitalize on this fortuitous twist of fate, the “TV Girl traveling All-Star Band” will be performing their iconic album in its entirety, giving the album the triumphant national tour it always deserved. Don’t look at it as a cynical cash grab. See it for what it really is, the cathartic revenge of the underdog, courtesy of TV Girl, “The Last Great American Indie Band.”

Born and raised in Johannesburg, South Africa, Jordana left home at an early age to pursue her dream of leaving her mark in the timeline of music history. Since settling in Dallas, TX she has collaborated with a number of producers including Geoff Rockwell and Grammy-Nominated Carmen Rizzo. In April of 2017 following the release of her electro-pop Record, ‘Lost + Found’, Jordana signed with Los Angeles based music publishing and licensing company, Lyric House. In just her first year with Lyric House she has seen several placements across different shows that run on MTV.

There's a 6 ticket limit per customer/account/household/email/credit card/address. Orders exceeding the 6 ticket limit subject to cancellation. Orders place for the sole purpose of resale will be cancelled. 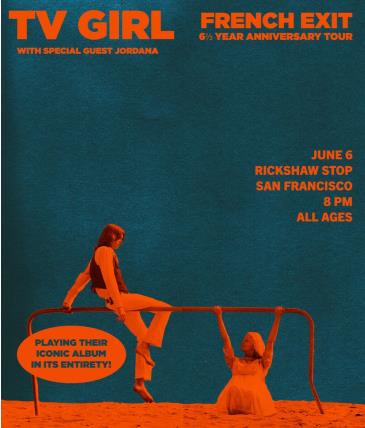