Assemble your squad and head on over to Avalon Hollywood for a night of soulful electronic music and endless dancing on November 10.

Headlining the evening is TWRK, an electronic duo made up of New York natives BENZi and eSenTRIK. Both of these highly talented individuals built their careers with a hip hop and rap foundation - and since then - have used this footing to distinguish themselves in the dance music community. Signed to Diplo’s Mad Decent label, the pair first released their debut single “BaDinga” which showcased their bass-filled, hip hop hybridity. More recently, the pair has collaborated with Migos and Sage The Gemini for a smooth track both dance and rap music lovers appreciate.

Bass music heavy-hitter Infuze will also be joining TWRK for the night. Known for combining majestic melodies with filthy bass lines, Infuze has released remixes for trap kings RL Grime and Flosstradamus as well as having his original track “Alive” come out on A-trak’s Fool’s Gold Records. Infuze has recently collaborated with Team EZY and FATHERDUDE to release the track “Tell Me Again,” which is currently out on Fool’s Gold.

Ending the night will be Braveaux, whose high energy sets will keep the crowd moving during the afterhours.

Fat Since 95 will be providing an opening set before Infuze delivers his magic. Get ready to experience some groovy bass beats with Fat Since 95 before the night’s headliners take to the deck.

SJXN and Jeremy Drama will take to the decks at the start of the night. Come early to move to some tunes before the night sets off into bass heaven!

Combine the iconic Avalon Hollywood and a constantly evolving roster of boundary-pushing electronic acts and you've got the recipe for CONTROL LA. Born in 2008, the weekly phenomenon stands as the longest running nightlife party in the states and maintains its ground-breaking music programming by showcasing the strongest up-and-comers with festival headliner potential. Previous years have seen the likes of an early Skrillex, along with acts like young Zedd, Wolfgang Gartner, Porter Robinson and a pre-"Turn Down For What" DJ Snake all having graced the CONTROL stage, it's safe to say the Friday event is the premiere stop for DJ prodigies. CONTROL has sounds for everyone, diversifying its lineup with an array of hip-hop artists including Mystikal, Zaytoven, and DJ Premier. Each CONTROL LA lineup is invariably ahead of the curve and adds to the over 4,000 bands and DJs who have already performed at the renowned event. 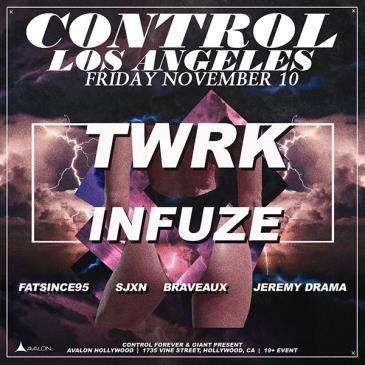