Tab Benoit, one of music’s most enduring and masterful blues and roots performers -  and an authority on Louisiana music and culture - leads an all star band featuring three giants of Louisiana Roots Music - Big Chief Monk Boudreaux, Johnny Sansone, and Waylon Thibodeaux.

Big Chief Monk Boudreaux (HBO's Treme) incorporates African Rhythms and Mardi Gras Chants into his own original style of Rhythm and Blues. Boudreaux is the Big Chief of the Golden Eagles, a legendary Mardi Gras Indian tribe. He is widely known for his long-time collaboration with Big Chief Bo Dollis in The Wild Magnolias. In 2016, Boudreaux received a National Endowment for the Arts National Heritage Fellowship in Washington, DC.

Johnny Sansone goes deep into Bayou Blues and Zydeco with his roof shaking vocals, harmonica and accordion. Sansone has won numerous awards in the Crescent City, including multiple categories for Offbeat magazine's annual "Best of the Beat” competition.

Rounding out the Jam is Waylon Thibodeaux on vocals and fiddle.  Born in Louisiana’s ‘Bayou Country’ just a few miles southwest of New Orleans, Houma native Waylon Thibodeaux has been dubbed “Louisiana’s Rockin Fiddler”. His rollicking, Cajun and zydeco rhythms never fail to serve up a good helping of spicy, high-energy Louisiana fun. 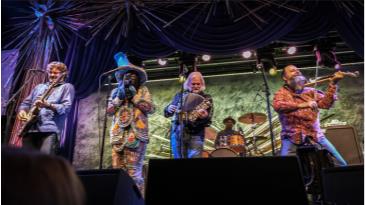