All Ages | 8:00PM Doors | 9:00PM Show$10 Adv | $15 DOSThis event will be all ages for the duration of the concert and will convert to an 18 and up only Temple dance night after Voltaire's performance. BE ADVISED: some material is for mature audiences___Aurelio Voltaire is often described as a modern day renaissance man. He is a singer/ performer, creator of comic books, animation and toys.As a musician, he is a songwriter whose music can best be described as a collection of murder ballads, tongue-in-cheek exercises in the macabre, with just enough bawdy songs about Star Trek and Star Wars to keep a convention audience rolling in the aisles. Many know him for his songs "Brains!" and "Land of the Dead" from the Cartoon Network show "The Grim Adventures of Billy And Mandy".Aurelio Voltaire's live shows, whether solo or with his skeletal orchestra, are full of stories and games. Many describe his shows as sitting around a fire while an old friend regales you with tales, presuming that old friend drinks a liter of rum a night, dates zombie prostitutes and wrestles Krakens.Voltaire has been recording and touring for 20 years. He's released 11 full length albums. The first five were released by Projekt Records. These days, Voltaire self-releases most of his CDs. 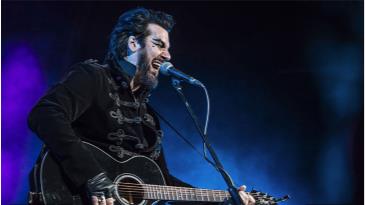