PLEASE ENTER A VALID EMAIL TO RECEIVE YOUR ETIX

Come join us IN PERSON as we celebrate the music and philanthropy of Jerry Garcia and the Grateful Dead.  This year we are proudly supporting three non profits,  Habitat for Humanity, Flagstaff Family Food Center and the Haven Walker Memorial Music Scholarship. We have amazing bands from Flagstaff,  Phoenix,  Tucson, Prescott and Albuquerque! We are also helping out two music venues we love, The Orpheum Theater and the Flagstaff Brewing Company.

* Lots of amazing music featuring featuring Dave Logan and the Not Dead Yet, Flagship of Fools w. Special Guests, Let it Grow, Legion of Mario and Xtra Ticket

Xtra Ticket: Arizona’s longest running Grateful Dead tribute, was formed in the summer of 1994 and fronted by Evan Jones and Dave Hebert. Since then, Xtra Ticket has continued to celebrate the music of San Francisco’s legendary Grateful Dead, delighting audiences throughout the West. Ticket successfully uses the same sonic template as the Dead, complete with two drummers, keyboards, bass, and two guitarists specific to the Bob Weir and Jerry Garcia roles and interplay which proves an effective way to help recreate the magic of a live Grateful Dead performance. In 2011, Hebert was tapped by Jerry Garcia’s longtime keyboardist Melvin Seals to be lead guitarist and vocalist of the Jerry Garcia Band (JGB Band). This musical outlet served to energize and stimulate an ongoing creativity that goes to the heart of the Grateful Dead catalog. It is our belief that we share a kindred spirit with other Grateful Dead tributes and Dead Heads the world over. We are indebted to band itself for creating this body of music and jamming style that celebrates life in all its beauty. Celebrating their 25th anniversary in 2019, Xtra Ticket looks forward to truckin’ into the 21st century.

Let it Grow: is a Grateful Dead tribute act from Albuquerque NM. Since 2013 they have performed hundreds of shows and enjoyed great regional success sharing the stage with some of the biggest national touring acts on the circuit. Known for their exciting original improvisation, the full 6-piece band delivers heart felt renditions of classic songs, while emulating the set lists of historic performances. Let It Grow provides a robust, visceral concert experience steeped in the tradition of The Grateful Dead's celebration of life through music and community. With a sincere love of the craft, they continue to excite Dead fans old and new.

Legion of Mario: Tucson has a Shining Star in Legion of Mario. If you want to hear the best JGB tunes played to perfection, then Mario, Mark, Doc and Andy are the band to see. Legion of Mario has been blowing minds for years, throughout the Southwest. Headlining events in Arizona and beyond.  Mario channels the various tones of Jerry, and the 70’s and 80’s vibe he creates is beyond description.  This is a band YOU DO NOT WANT TO MISS!

Flagship of Fools: has been playing for over 12+ years, celebrating the music and philanthropy of Jerry Garcia and The Grateful Dead. We have always made sure we evoke the feeling of a Dead or JGB show, and putting you in that special place. We have a deep repetoire and love mixing up our favorite tunes for you, and never have we repeated a setlist. We make sure our fans and local community charities always  profit in our events.

Prescott JRAD:  if you want to hear a creative talented band that really has something to say, you need to hear Prescott JRad.  4 amazing talented musicians who listen, create, improvise, and make musical MAGIC.  I've heard them play "Eyes of the World" a dozen times.  But each time they take it to new exciting places.  Same song, same chord changes, and sometimes exactly the same beginning and ending...... but what they do I  between is amazing, new, wild ... and MUST be experienced.  You MUST see for yourselves!!!!

Lonn Calanca & Friends Super Jam: Everything you love about Jerry and the Dead, free form exploration, special guests, deep cuts and classics played to perfection! This is another show YOU DO NOT WANT TO MISS! This is a ONE NIGHT ONLY special event!

The Harvest: is a tribute band born out of the passion that each member shares for the Grateful Dead. The Harvest’s vibe is high energy and they bring a funky and soulful sound to the songs in a way that keeps the dance floor moving. Like the Grateful Dead, The Harvest adopts the improvisational nature of the music ensuring no two Harvest shows will ever be the same! 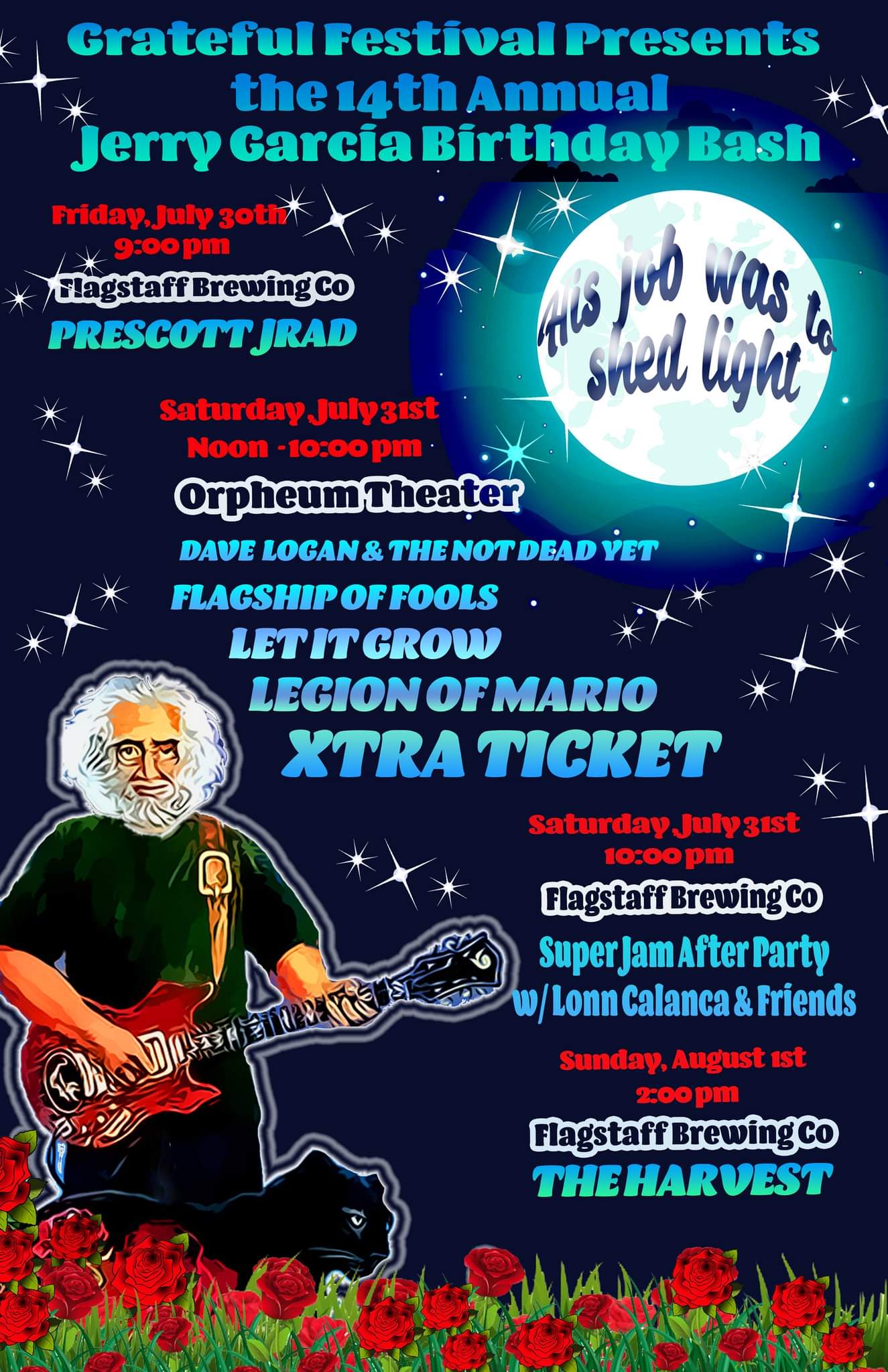