The Afternooners with Connor Kelly ATTP and Eric Kirkendoll

The Afternooners are a group of guys hailing from Chattanooga, TN who cherish good times and great music. Known for their high-energy live shows, they never fail to impress each listener in the room by exploring genres such as, Jazz, Reggae, Blues, and Alternative Rock. Nothing is off limits as they are constantly branching out and reaching for new sounds!

Since 2017, The Afternooners have played all throughout the Southeast, racking up 90 plus college shows. Since then they've established a name for themselves in each city and are quickly growing a strong following. Keep your eyes peeled for the next time they roll through your city.

In the Spring of 2021, The Afternooners released their debut full-length LP, Peace & Panic, recorded at Plaid Dog Recording in Boston, MA.

Connor Kelly
If you haven’t checked out Connor Kelly, now is the time. His debut album, “Informal Conversations,” was released back in 2018, and is true Rock n Roll in the purest sense. “Hawaii Mustang” remains Connor’s most streamed track (773k Spotify streams), and is certainly a favorite. Give it a listen… you’ll love the introductory guitar rift. 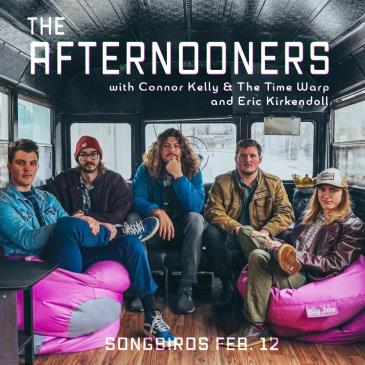