The Billie Holiday Project, led by Stella Heath, celebrates the music of

Lady Day! Shrouded in mystery, as she was draped in furs, Billie was quintessentially multi-faceted, possessing the sensitivity and ability to make the songs she sang as personal as if she was singing them softly in your own very ear. Featuring some of the Bay Area’s finest Jazz musicians, The Billie Holiday Project evokes the electric and intimate feeling of experiencing Lady Day live in a 1930s Jazz Club. Drawing from some of Billie’s most recorded tunes, such as Blue Moon, Billie’s Blues, God Bless the Child, and Strange Fruit, to name but a few, the band also revives some of the earlier and lesser-known tunes that Billie interpreted. In performance, interspersed with the music are stories of Billie’s life and musical artistry. The Band features Stella Heath, invoking the vocal stylings of Billie Holiday; Neil Fontano, piano virtuoso from Sonoma County; Michael Fortunato, rich and inventive on tenor saxophone and clarinet; Trevor Kinsel, interchanging between upright bass and cornet; and the Spike Klein on the drum kit. 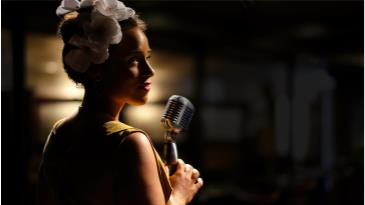