About The Brook & The Bluff:

The Brook & The Bluff have quickly become recognized for their evocative blend of instrumental talent and vocal harmony. These elements are readily apparent in the band's debut track, “Masks.” Having initially gained momentum via Spotify, the song has helped spur the band forward in their musical pursuits.

The group's first year as a full band was widely successful. From charting on Spotify's US and Canada Viral 50 Playlists, performing at the NAMM shows in both Nashville and Anaheim, and selling out shows in Atlanta, Birmingham, Huntsville, Nashville, Auburn and more, the band has had an exhilarating start.

Originally an acoustic duo, Alec and Joseph started turning heads in local venues with clean vocals and expert guitar work. John and Fred noticed the talent and potential of the duo and joined the group, expanding their sound with driving rhythm and four-part harmonies. The band instantly locked in and have been playing together ever since.

Columbus based Doc Robinson got its start in 2015 during a songwriting session with Jon Elliott of The Floorwalkers, and Nick D’Andrea of Nick D & the Believers. The two quickly realized they had a natural writing chemistry, and in the course of a month had written a hatful of songs. They teamed up with producer Mike Landolt, who has worked with artists ranging from Maroon 5 and Spin Doctors to OAR. They recorded their first EP Golden Daze with Mike in his Columbus Curry House studio, collaborating with musicians from all over the local music community.

The sound of Golden Daze was a blend of Motown and Indie Pop, with influences ranging from legends like Smokey Robinson to more contemporary artists like Amy Winehouse and Dr Dog. It all blends together in a sound they like to call Backyard BBQ Breakup music.

After releasing Golden Daze they set out to make a full length album, again seeking help from musicians from all corners of their local music community. The result was their first full length record Deep End. This time they produced all the of the music themselves, spending 6 months in their lead guitarist and co-producer George Barrie’s home studio the Track Shack, experimenting with song forms, adding layers of instrumentation, and pushing their songs beyond the more conventional indie-pop forms found on Golden Daze. Several of the songs went on to find homes in the background of tv shows. Most notably with the song Break My Fall, which was featured on an episode of Bojack Horseman, a long time favorite of the band.

Following the release of Deep End, they were offered an opening spot with Columbus based Americana trio CAAMP. They went out on an extensive east coast and midwest tour performing as a duo with acoustic guitar and harmonica. While on tour they wrote several new songs inspired by the sounds of CAAMP, and limited by their minimal instrumentation as a duo. While on the road they also began co-writing songs with the CAAMP boys and found fresh inspiration and delight in incorporating their soulful, melodic americana into the new songs.

Fresh off the road with a raft of new songs, they went into the studio again to record their second full length album Ring Of Love. This time they piled in to Musicol Studio, established, and family owned and operated in Columbus since 1964, with an arsenal of priceless vintage mics and a live room that had Columbus music history oozing out of the walls.

For this record they chased the sounds of old favorites like Let It Bleed and American Beauty, with raw, roomy tones, and honest, live band performances. Again they dragged in friends and musicians from around the community to add layers of horns, strings, banjo and group vocals. At this time they also solidified a core rhythm section with Aaron Bishara (Wet Darlings) on drums, and Jeff Bass (Forest and the Evergreens) on bass.  They released Ring Of Love in early 2018, followed up by two EP’s recorded live at Musicol with their band and members of CAAMP.

One EP features a Grateful Dead cover (Ripple), and five alternate acoustic takes of songs from Ring of Love, recorded live around one big, old, beautiful U87. The second EP features a Cat Stevens cover (Here Comes My Baby) and four original songs co-written with members of CAAMP and friend and fellow songwriter Parker Louis.

They capped off these releases with an opening spot on a sold out CAAMP tour down through Texas, out to the West Coast, up into the northwest as far as Vancouver, then back through the midwest. This time they got to bring the full band along, and experienced the extra-terrestrial high of playing a sold out Troubador in LA, and even hopped up into Canada for their first international show. Along the way they released two singles Dreams With A Broken Heart, and If You’re Gonna Ignite. 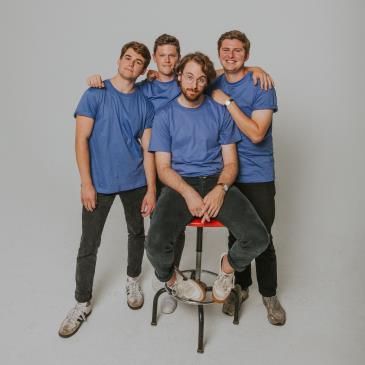