Whether traveling to gigs on horseback or by tour bus, Americana mavens The Brothers Comatose forge their own path with raucous West Coast renderings of traditional bluegrass, country and rock ‘n’ roll music. The five-piece string band is anything but a traditional acoustic outfit with their fierce musicianship and rowdy live shows reminiscent of stadium rock concerts. In fall 2017, “Campfire Caravan” featuring The Brothers Comatose, Mipso, and The Lil Smokies hosts three of today’s foremost emerging indie Americana bands as they trek across the United States to more than 30 cities. “Campfire Caravan” honors the musicians’ early days playing music, when they’d perform for friends and family in basements, living rooms, and around campfires. “Campfire Caravan” celebrates the American tradition of gathering communities around music.

Following three critically acclaimed full-length studio albums (Songs From The Stoop, Respect The Van, City Painted Gold), the five-piece string band disrupts the traditional album cycle and focuses their 2017/2018 release schedule on a series of strategically released songs. Produced by indie-rock legend John Vanderslice, the first four new songs to be released in 2017 include the sun-soaked new single “Don’t Make Me Get Up And Go” that channels harmony vanguards The Beach Boys.

“Cedarwood Pines” is an early-‘70s-esque alt-country number reminiscent of a George Harrison, post-Beatles sensibility. A new music video for “Cedarwood Pines” captures the band’s recent horseback tour across California’s gold country in the Sierra Nevada Foothills featuring beautiful California vistas, saloon and events center gigs, and the band of brothers loving life out on the range with their characteristic whimsical charm.

“Get Me Home” reflects the struggle for commitment and fidelity in a relationship that has to survive the rigors of artists hitting the road while their partners are at home. Life as a nationally touring act has its extreme highs and lows. As the days go on with show after show, relationships must bear increasing distance, temptations, and loneliness. Despite crazy schedules and differing experiences between two lovers, “Get Me Home” keeps the gravity of being faithful and remembering the promises made at the center of one’s life while touring the world.

Beautiful acoustic guitar work and crooning baritone vocals from lead singer Ben Morrison opens up “Joshua Tree.” An escapist tale for a couple weighed down by the burdens of big city life, “Joshua Tree” hones in on how simple pleasures become amplified when experienced in a magical desert world such as Joshua Tree, CA. Running through the sand, drinking cold wine, dreaming about the sun, there isn’t a worry in the world. Even with city life weighing you down, “Joshua Tree” celebrates a destination where you can leave your concerns at the door and focus on what’s important.

The Brothers Comatose is comprised of brothers Ben Morrison (guitar, vocals) and Alex Morrison (banjo, vocals), Gio Benedetti (bass, vocals), Philip Brezina (violin), and Ryan Avellone (mandolin). When they’re not headlining The Fillmore for a sold-out show or appearing at Hardly Strictly Bluegrass Festival, the band is out on the road performing across America, Canada, Australia, and hosting their very own music festival, Comatopia. In 2018, The Brothers Comatose traveled Asia for a month of cultural music exchange and education with American Music Abroad, a program directed by the State Department.

Moshe Vilozny was born in Portland OR and raised in Santa Cruz CA; spending summers in Israel and winters throughout Latin America. Moshe incorporates life experiences into original songs steeped in American Roots Music & sprinkled with influences from his world travels. Moshe has been writing, performing & recording original music since high school. His 1st album "Revolucion" was released in 2005 featuring a 7 piece band backing his original songs sung in English, Spanish & Hebrew. They toured the west coast packing venues & festivals including main-stage performances at Oregon Country Fair, Earthdance, Sierra Nevada, & Reggae On The River; where they were joined on stage by Michael Franti. In 2016 Moshe returned to his acoustic roots with the release of "Lost & Found" performed live in studio. The album is in rotation on several prominent west coast radio stations including KPIG.​ Moshe recently performed at Hardly Strictly Bluegrass 2019 and is currently recording his 3rd full length album of original material (out 2020). 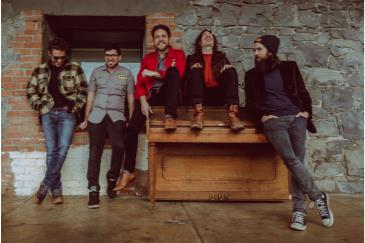