Processing...
407638
158365
The Cybertronic Spree’s Indianapolis show at LO-FI Lounge has been postponed. We are currently working on a reschedule date.  Hang tight for more information. Please direct any questions to boxoffice@mokbpresents.com. You can follow our ongoing list of affected shows here: http://bit.ly/mokb-hifi-covid19updates
JOIN WAITLIST

The Cybertronic Spree's Indianapolis date at HI-FI has been rescheduled for March 7, 2021.  All tickets purchased for the original date will be honored on the rescheduled date. Please direct any questions to boxoffice@mokbpresents.com.  You can follow our ongoing list of affected shows here: http://bit.ly/mokb-hifi-covid19updates
----------------------------
DOORS: 7:00 PM, SHOW: 8:00 PM

About The Cybertronic Spree:

More than meets the eye, The Cybertronic Spree are here on Earth with one critical mission: To party like it’s 1986! This band of Transformers has been brought together by the power of rock ’n roll and they can’t be stopped. Join Hotrod, Arcee, Rumble, Unicron, Soundwave, Bumblebee, Shockwave and a Quintesson as they prove they’ve got the power to light your darkest hour. Known across the galaxy for having cast aside their warring factions in the search for the ultimate party, these rockstars in disguise play music from The Transformers: The Movie, hit film and anime songs, and video game covers. They blend their love for the ’80s and ’80s metal into an energon-fueled, unforgettable live show!

mc chris is rapper from Libertyville, Illinois, a suburb of Chicago. He was one of the first rappers to focus solely on nerd life, rapping about Star Wars, Harry Potter, ninjas and unrequited love. And he's the only rapper that was ever an animator for Cartoon Network for five years.

mc was one of the pioneers of Adult Swim. He was writer, actor, songwriter and animator for shows like Sealab 2021, The Brak Show, Space Ghost Coast to Coast and Aqua Teen Hunger Force. He has voiced characters on several Adult Swim pilots such as Welcome to Eltingville, Cheyenne Cinnamon, Your Pretty Face is Going to Hell and Tight Bros. He was also a producer of on air content for over a year before leaving Williams Street in Atlanta to pursue a career in music. 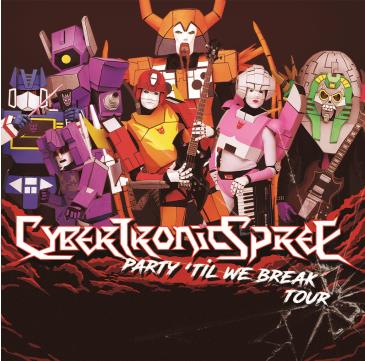