TICKET LIMIT: 4. ALL TICKETS ARE NON TRANSFERABLE AND NON REFUNDABLE. SUPPORT ACTS ARE SUBJECT TO CHANGE.

On their Dualtone Records debut Sticking With It, Seattle-based seven piece The Dip deliver the kind of unbridled rhythm-and-blues that hits on every emotional level. Inciting everything from raw catharsis to heavy-hearted reckoning to wildly exuberant joy, the self-produced album marks a major creative breakthrough for the band. To that end, Sticking With It fully channels the vitality of the freewheeling live show that’s earned them an ardent following over the last decade, matching their sophisticated musicianship with a fantastically loose energy. When met with The Dip’s reflection on matters both timely (the crush of late capitalism, the glaring need for true community) and irrefutably timeless (the vast complexities of love and loss), the resulting body of work captures the mood of the current moment while offering immediate escape into a more elevated state of mind.

The third full-length from The Dip, Sticking With It came to life at their studio in Seattle’s Central District, a modest but meticulously outfitted space the band built entirely on their own. Although the album features a small number of guest musicians (including a Macedonia based string ensemble and background singers Vanessa Bryan, Dasha Chadwick, and Nic Jackson), The Dip crafted each extravagantly arranged track according to a self contained process that allowed for a rare depth of exploration and spontaneity. “It’s really important to us to catch those lightning-in-a bottle moments when you can feel the momentum of a song taking shape,” says drummer Jarred Katz. “At the same time, it makes a huge difference to have this homebase where we can take our time with the sounds and not worry about that precious studio clock ticking away.”

Kicking off with a magnificent bang, Sticking With It opens on “Paddle to the Stars”: a prime introduction to the groove-heavy and richly detailed sound The Dip have embodied since playing house parties in the early 2010s. The first song recorded for the album, “Paddle to the Stars” arrives as a striking departure from the reverb drenched aesthetic the band’s favored in the past. “We’d gotten some nicer gear to play with, and wanted to try something completely different in terms of our guitar sounds,” notes guitarist Jacob Lundgren. “We ended up going with a very dry sound with no reverb behind it, which allows you to really hear the room and feels so much more like the live show.” And as lead vocalist Thomas Eddy reveals, the song’s stark quality is perfectly suited to its candid declaration of devotion. “It’s about being in relationship with someone who’s emotionally in touch beyond your own abilities, but recognizing that and wanting to invest in opening up,” he says. “I liked the idea of playing with the image of the immensity of the ocean, how it’s sustaining but also dangerous— and if you don’t watch out, it’ll get you.”

In its intimate examination of the human heart, Sticking With It also includes tracks like “Sleep On It” (a delicately layered love song about “someone who only gets to see the object of their affection in their dreams, so they’re just waiting until they can go to sleep again,” according to Eddy). One of the album’s most profoundly moving moments, “When You Lose Someone” brilliantly contrasts its meditation on grief with the rapturous harmonies of Bryan, Chadwick, and Jackson. “They’ve been singing together for over a decade and they’ve got an impeccable blend in the room, so we captured that by recording the trio gathered around one microphone,” recalls trumpet player Brennan Carter. “They were on board with whatever was required to elevate the music, and the results are undeniable.” And on “Real Contender,” The Dip present a bold but bittersweet standout built on a blues-country groove and shapeshifting arrangement courtesy of tenor sax player Levi Gillis. “It’s about someone who’s always been there as a friend but who now wants to be considered in a romantic way,” says Eddy. “I was really inspired by how Levi’s intro was upbeat but sorrowful, which is a compelling thing to work with as a songwriter.”

While Sticking With It endlessly spotlights each member’s exceptional craftsmanship, The Dip embraced a sort of anti- perfectionism in every step of the process. “One of the main goals for the album was to create that feeling of all of us in a room together, instead of worrying too much about everything lining up perfectly,” says Katz. Not only essential in shaping Sticking With It’s sense of abandon, that approach echoes the uniquely communal spirit at the heart of the group. “In other bands there might be a hierarchy as far as who’s in charge and who writes the music, but we make sure to keep everyone involved,” says Katz. “With seven people it can be hard to agree on anything, but to me all the success we’ve had so far has to do with being very democratic and letting everyone have equal say,” Eddy continues. “We all believe in doing it our way, handling everything ourselves and making sure we’re choosing the right songs for the right reasons.”

After years of defying trends and following their own distinct vision, The Dip have steadily amassed a passionate fanbase (an element reflected in their tremendous organic success on Spotify). In the making of Sticking With It, the band kept their ever-growing reach in mind, ultimately creating their most impactful work to date. “With the lyrics I tried to evoke certain emotions that aren’t often showcased in popular music, with the hope that people will come away feeling validated or understood,” says Eddy. Indeed, the title to Sticking With It partly refers to the joyful sense of gritty perseverance The Dip hope to impart to their audience. “We’re in this strange moment when sometimes it’s difficult to even get out of bed because of what’s going on in the world,” says Katz. “But over the years we’ve had so many people tell us that our songs have helped them get through a rough patch, or break through to a new beginning in their lives. That’s something we’re honored to provide for everyone, and hopefully these songs will do the same.”

Dos Santos have released their highly-anticipated album, City of Mirrors.

“City Of Mirrors . . . feels like it’s perpetually building and expanding . . . the bolts are tighter than ever on this project — and the subject matter is weighty & pressing, marking an imaginative step forward for a band that’s never limited itself to begin with. — Rolling Stone

“City of Mirrors . . . reflects a band convinced that artistic ideas and political ones are not necessarily at odds, but different sides of the same truth. A relentlessly kaleidoscopic mosaic of novel sound pairings propelled by Latin rhythms, the album evokes the crisp air, soft color, and enveloping warmth of a greenhouse.” — Pitchfork

“A sweeping epic of Latin American rhythms and borderland poetry . . . The album is a loving melange of tradition, spirituality, and odes to a Latinx diaspora…” — Bandcamp

"Dos Santos’ lyrics reflect current cultural shifts, just as their music merges the past with the present. This satisfies a yearning felt by many BIPOC to connect their daily lived experience with their roots. For Latine folks in Chicago and beyond, City of Mirrors reflects our heritage and our lineage, and reminds us that we’re an ancient people—we’re still here, and this is what we’re going through.” — Chicago Reader

“Exuberant and teeming with character, City of Mirrors is a record that sonically captures the push and pull of our contemporary world . . . Charismatic and sharp, the record is sure to please fans both new and old.” — Chicago Tribune

“Dos Santos create their own tales of freedom and unity with a dazzling technicality . . . City of Mirrors is an album to be enjoyed for years to come, passed on for generations, like the songs of our ancestors’ triumphs and hardships.” — Paste Magazine

Cinematic in its journey, the album reflects sounds from across the Americas combined with compelling poetic narratives. Its 13 tracks consolidate the band’s unique identities, creative and cultural roots, and their penchant for honoring traditional Latinx music with contemporary compositional expressions and production techniques. It achieves the band’s mission to push against their own musical boundaries while also exploring themes of social justice, migration, and contemporary human struggle. Chavez articulates beautifully: “City of Mirrors is an assemblage…glimpses of tradition… reflections on our collective present… luminous echoes between love and solitude, hope and absurdity, euphoria and mourning. This album grapples with and transgresses these binaries because we have/and continue to cross borders. Yet, for us, the border is no metaphor—too much real staring back at us. We embody the border. We (our families) have crossed it. We (our stories) are coated with its residues. And so… we cross the border of self through our art – out of necessity.”

The five began working on City of Mirrors without any expectation of what it would be. They simply hoped to create an honest, unique, and border-defying but broadly communicable sound. To achieve this, they decided to incorporate a sixth member. That led to City of Mirrors being recorded in Los Angeles under the direction of artist, producer, and longtime friend of the band Elliot Bergman (Wild Belle, NOMO). 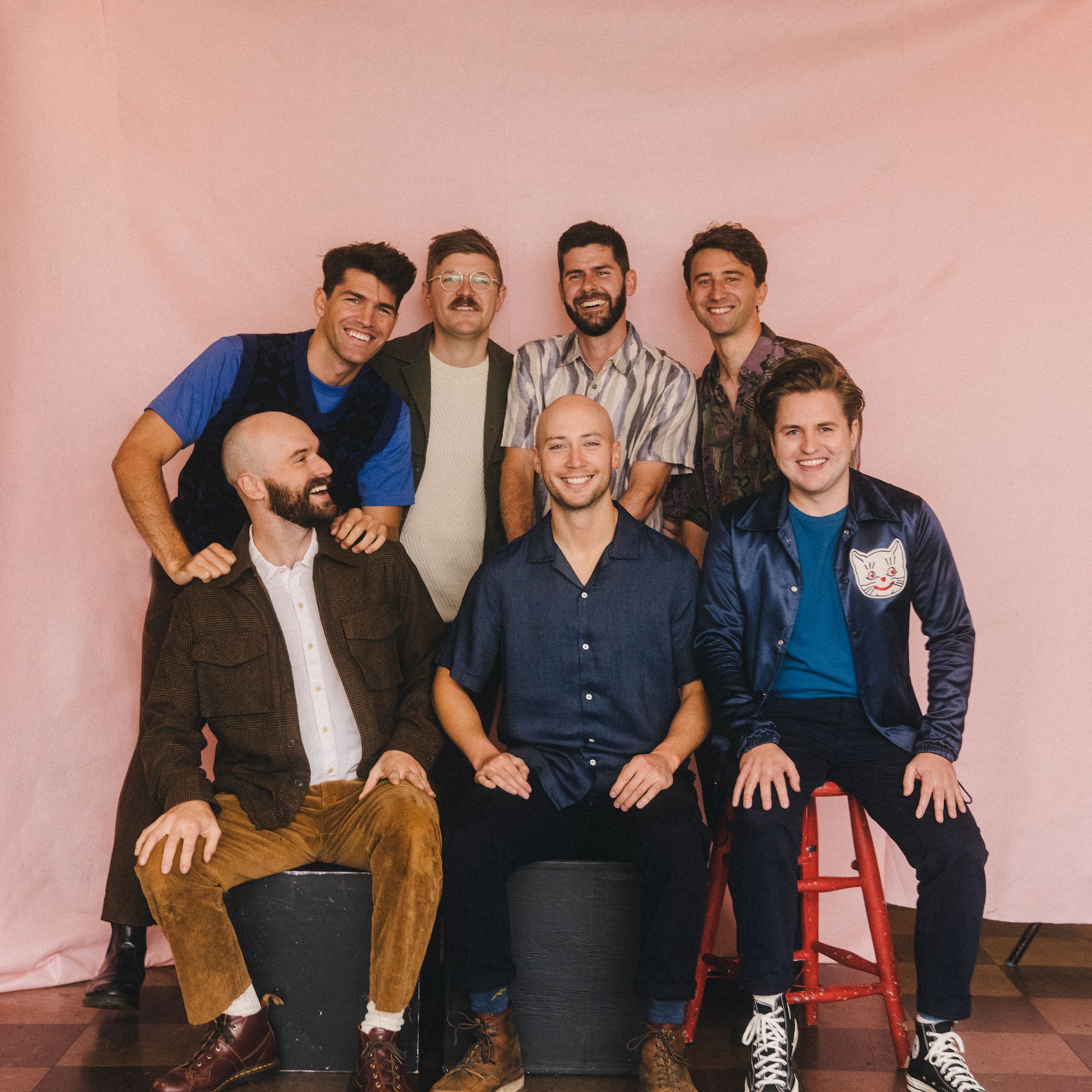