The Dirty Diamond/State to State

Tickets available for purchase at the Troubadour Box Office.

website
The Dirty Diamond is a rock band with true chemistry and timeless dynamic songwriting. The four-piece has been cultivating a substantial grassroots fanbase during the last decade with their high vibration live shows and fantastically innovative studio recordings. The band is comprised of some of the most sought after LA based session players.. drummer Shay Godwin, bassist Derek Frank, and guitarist Fernando Perdomo. Their eccentric and soulful singer/guitarist Sam Babayan is a shaman-like troubadour with lyrics, melodies, voice and slide guitar playing that takes the listener through a rich multi layered sonic journey.

Hailed as the Los Angeles flag bearers of alternative rock, State to State stand out for their live performances, innovative approach to songwriting, and the powerful, soaring range of lead vocalist Shea Stratton. State To State routinely plays to sold-out crowds across SoCal. State To State routinely plays to sold-out crowds at most legendary LA venues. After taking part in the final Vans Warped Tour in 2018, State to State joined multi-platinum selling Candlebox on tour for part of their 25th anniversary that fall. Candlebox invited State To State to support them again at LA’s iconic El Rey Theatre in 2019. The band performed at Milwaukee’s Summerfest 2019, providing main support to Collective Soul. State To State released their most recent single "Undead Love" Spring 2020; a first taste from their upcoming sophomore album, produced by Johnny (Megadeth, Disturbed, 3 Doors Down), due in 2021.

Four humanoids dressed in all-silver appeared in the Nevada Desert and introduced the Robot Nature sound to over 12,000 hyperactive burners, becoming one of the most talked-about acts of the week.

What happened next was insane...

Bookings started flying in and venues started selling out in Los Angeles and beyond, as well as the group picking up numerous awards like "Band of the Year" and "Music Video of the Year".

The Robots have brought their hyper-catchy sound to a party so big it almost got shut down at SXSW, festival dates in Europe, and are now ready to go coast-to-coast to become America's next big electronic live act.

Although they have been described as the new Muse, Maroon 5, or Imagine Dragons… their extraterrestrial electronic sounds, catchy pop melodies, woven with lead Robot DPAK’s tenor vocals, electrified violin and acoustic guitar give Robot Nature its own futuristic sound.

Be part of the robot revolution or get left behind.

Tyler Steele is the quintessential LA native who came through a lineage which makes his poetry and point of view as unique as they come. His father synthesized the cocaine that got all the rock stars high for a decade, but then he got arrested. His lawyer became Tyler's stepdad who started Death Row Records where Tyler got exposed to even more fantastical madness. Through the turmoil and danger, Tyler turned to the pen for solace and reckoning and in those torrent times, developed his voice as a truly gifted poet. From dysfunction emerged a painstaking shamanic POV ready to weave the antidote into his songs.

From Berklee School of Music to New York to London, around the globe and back to LA, Steele emerged wiser, burning like a Pheonix above his family tree as it burned beneath. He was ready to record. Having already been injected with the LA venom, Tyler found himself in the serendipitous circles that would bring his music to shine, recording with the cream of the crop boutique musicians in his hometown. He has been extremely prolific with poetry always at the forefront of his songwriting. He is a story teller with his archive of material still unreleased. They ask him what he's been waiting for, “As the cobra or the mamba would say, ‘the perfect, deadliest moment to strike. 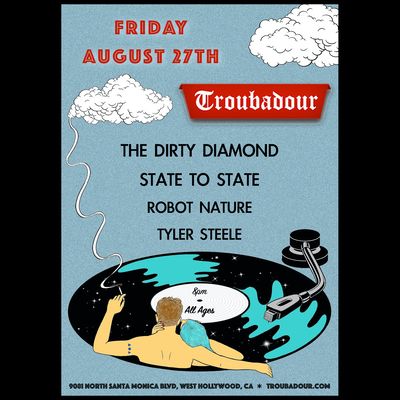 The Dirty Diamond/State to State