The Hooters *SOLD OUT!*

THIS SHOW IS SOLD OUT! ~ Please contact info@ardmoremusichall.com with any questions.

Event is SOLD OUT
Join the waitlist here

The Hooters at Ardmore Music Hall

In 1980, The Hooters burst onto the Philadelphia music scene as a new and different kind of rock band, formed by co-leaders and writers Rob Hyman (lead vocals, keyboards, accordion) and Eric Bazilian (lead vocals, guitars, mandolin, mandola, harmonica, saxophone). The other members include original drummer David Uosikkinen, John Lilley (guitars, mandolin), Fran Smith, Jr. (bass, vocals), and Tommy Williams (guitars, mandolin, vocals). Their unique blend of ska, reggae, and rock was a fresh sound in the clubs and on Philly radio, and in 1983, The Hooters released their first independent album Amore to great local success. The album also featured the “hooter,” or melodica, as part of their special sound and namesake. The Hooters' strong and powerful presence, as performers and as songwriters, led to their first major record deal in 1984 with Columbia Records. Their 1985 debut release Nervous Night quickly achieved Gold and Platinum status in the USA, Australia, and Canada with the hits “And We Danced,” “All You Zombies,” “Day By Day,” and “Where Do The Children Go.” Rolling Stone magazine named The Hooters the "Best New Band of the Year" in 1985, and in July of that year, the group was chosen to open the historic Live-Aid concert in Philadelphia. By 1986, they had been touring the US and Canada almost non-stop, and that summer, The Hooters were sharing the stage at the Amnesty International Concert at Giants Stadium with acts such as U2, The Police, Miles Davis, Lou Reed, and Peter Gabriel. In 1987, the group released their second album, One Way Home, again achieving Gold and Platinum status in the US as well as new markets in Japan and Europe. With songs like "Johnny B," "Satellite," and "Karla With A K," David Fricke, from Rolling Stone, wrote, "The Hooters have made airwave magic with unconventional ingredients." In 1989, The Hooters released their third major label album on Columbia Records, Zig Zag. It introduced a more acoustic, unplugged Hooters sound, while still maintaining those infectious pop hooks for which the band is so well known. With the legendary folk trio Peter, Paul and Mary on backing vocals, their updated version of the classic "500 Miles" became a worldwide hit, which led to another double Platinum success for the band. It was also during this time that the group was asked by Roger Waters of Pink Floyd to participate in his multimedia extravaganza "The Wall" in Berlin, 1990, to celebrate unity in Germany after the Wall came down. The Hooters joined music legends such as Joni Mitchell, Van Morrison, The Band, Sinead O'Connor, and Bryan Adams for an unforgettable musical experience. In 1993 Out Of Body was released on MCA Records featuring the hit “Private Emotion,” which was later covered by Ricky Martin on his smash debut. It was during that summer that the band recorded their Live In Europe album (MCA 1995). Around this time, Sony also released a long-awaited compilation album entitled Hooterization - A Retrospective, a collection of their greatest hits, which earned the group its first Gold album in Germany. Rob and Eric have also contributed their musical and songwriting assistance to other artists including Cyndi Lauper, Joan Osborne, The Band, Carole King, Mick Jagger, Willie Nelson, The Chieftains, Jon Bon Jovi, Robbie Williams, The Scorpions, Dar Williams, and Taj Mahal, among others. In 2006, they recorded their first new studio album in 13 years, Time Stand Still, featuring the hit “I’m Alive” and their unique acoustic arrangement of Don Henley’s “Boys Of Summer.” The CD was officially released in September 2007 on MRI/Sony Red in the US, and through Neo/Sony BMG Distribution in Europe. In 2009, The Hooters released Both Sides Live, a double-album set featuring all the band’s greatest hits in both full-tilt electric and unique acoustic versions. And in 2010, their EP 5x5 was released, featuring the single “Silver Lining” as well as versions of the hits “Time After Time,” and “One Of Us.” Those two songs had previously earned Rob and Eric Grammy nominations for “Song Of The Year,” which they had written and recorded for Cyndi Lauper and Joan Osborne, respectively. 2017 brought Give The Music Back, a new double-live album recorded at the legendary Keswick Theater, near their home-town base of Philadelphia. This compilation CD and subsequent international tours continue to reflect their strong collaborations in the studio, their passionate energy onstage, and their long-time friendship on the road and off. And in October 2019, the group was inducted into Philly’s “Walk Of Fame” with their own sidewalk plaque on the Avenue of the Arts. The Hooters’ live shows endure as a joyful musical celebration for both the band and their loyal, enthusiastic fans. With the unforeseen arrival of the Covid-19 pandemic, they now plan to celebrate their 40th Anniversary in 2021 – come get Hooterized! 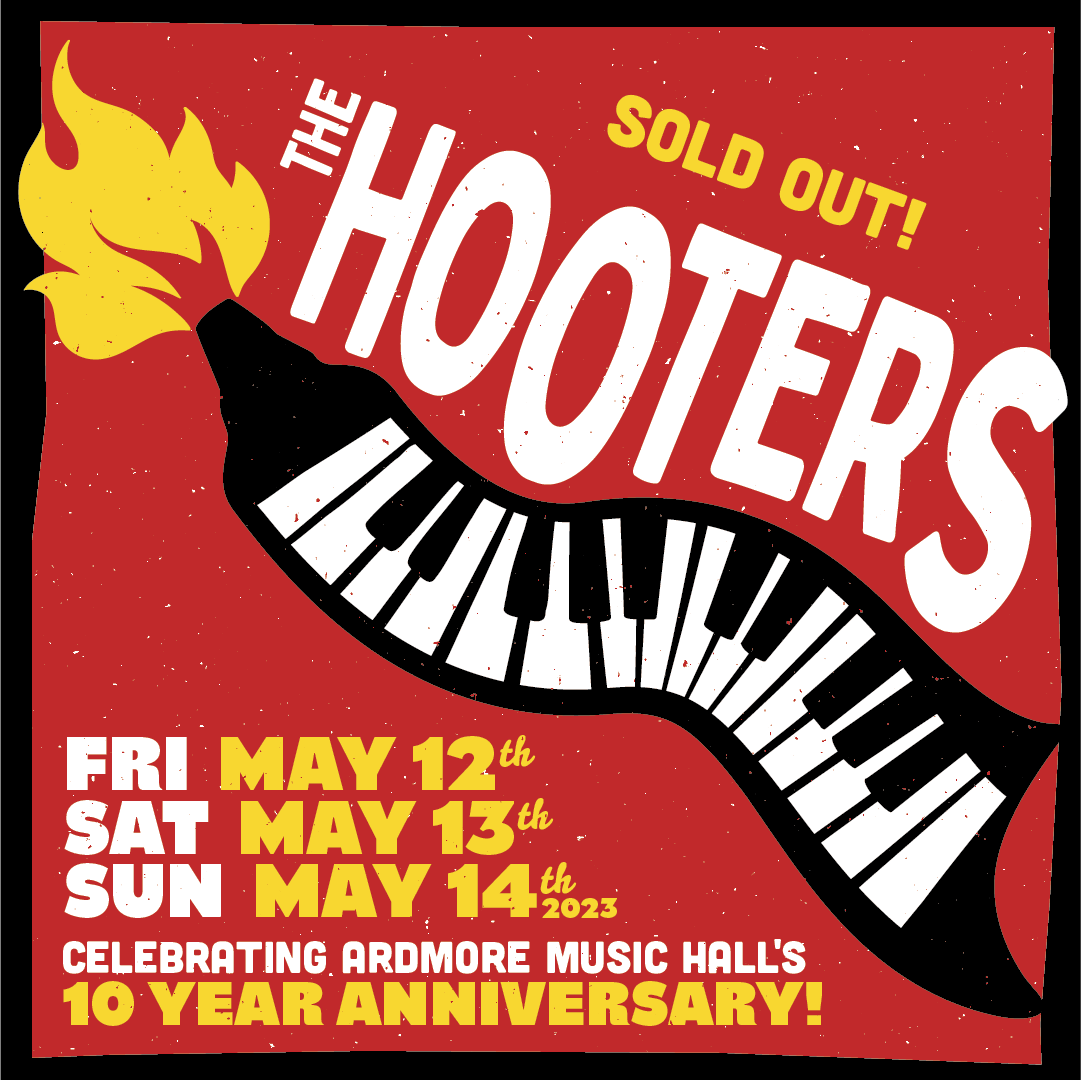