The Immediate Family is a unique group of iconic musicians who have played together for decades but never as their own band. Known for their long, illustrious careers backing up such Hall-of-Fame artists such as James Taylor, Keith Richards, Jackson Browne, Linda Ronstadt, Carole King, Stevie Nicks and Crosby, Stills, Nash & Young, guitarists Danny Kortchmar and Waddy Wachtel, drummer Russ Kunkel, and bassist Leland Sklar have come together, along with guitarist Steve Postell, to perform their own songs as The Immediate Family, a band that can legitimately be called a supergroup.

Any singer worth their salt was influenced by the greatest entertainers of eras gone by. Most have takenthese inspirations to unique heights of flattery and imitation but nothing more. Its time for a new day.Damon Dae. Original. Uniquely his own.With his easily identifiable sultry tenor voice, he is destined to find his place in history amongst the best.He has the ability-- a gift really-- to take a melody and make you soar, make you submit and make yousing along.Born in Sioux City, Iowa, eight year old Damon, the youngest of four, and his family, moved to FortWorth, Texas. This is where he was first influenced by attending his big brother Raymond’s bandaudition. Now in Los Angeles, Damon is not only an experienced singer but has branched out as asongwriter & producer.Not one to hide behind studio tracks, give Damon a microphone and a live audience and see a completeentertainer. When he sings it, he means it. He'll make you dance up a sweat then melt you with a ballad.Leaving you as raw emotion sensitive to the touch.Damon embraces his influences of Jeffery Osborne, Freddie Jackson, James Ingram, Luther Vandross,Peobo Bryson, Michael McDonald but, most of all, his songs and voice are of the original Damon Dae. Hehas weathered the trials and tribulations of the average up-and-coming performer and has emerged assomething more. He's a polished professional who's ready for his close-up. Giving you something youcan feel.

Founder of The Mint in 1990, Jed helped ignite an otherwise non-existent music scene in Los Angeles,helping the likes of Macy Gray, Ben Harper, The Wallflowers, and many, many others to become theartists they are today. Jed also is a musician/guitarist/songwriter who joined musical forces with DamonDae to create “Resurrection Road”. The mission? To resurrect Soul music for the soul. Originally a bluesplayer, Jed was able to absorb the many styles that made their way through the hallowed stage of TheMint over the years, to create a sound of his own. The result is the fresh soulful sound you will hear withRESURRECTION ROAD. 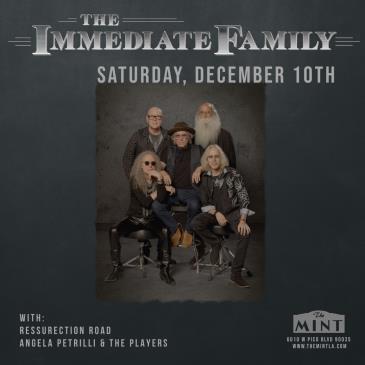