Processing...
407697
158365
The Lemon Twigs' Indianapolis show at HI-FI has been cancelled. We are working on a new date next year.  Refunds are available at point of purchase.  Online buyers will be refunded in 1-3 business days. Please direct any questions to boxoffice@mokbpresents.com. You can follow our ongoing list of affected shows here: http://bit.ly/mokb-hifi-covid19updates
JOIN WAITLIST

The Lemon Twigs' Indianapolis show at HI-FI has been cancelled. We are working on a new date next year.  Refunds are available at point of purchase.  Online buyers will be refunded in 1-3 business days. Please direct any questions to boxoffice@mokbpresents.com. You can follow our ongoing list of affected shows here: http://bit.ly/mokb-hifi-covid19updates

About The Lemon Twigs:

Do Hollywood, The Lemon Twigs’ 2016 debut LP, was an invigorating, much-needed blast of fresh air that whipped across the arid landscape of contemporary rock. If that stunningly accomplished recording, which flew in the face of current musical trends, wasn’t surprising enough on the face of it, the fact that Do Hollywood was the handiwork of two teenagers—brothers Brian and Michael D’Addario—rendered the achievement utterly mind-boggling. Now, with the follow-up full-length, Go to School (4AD, Aug. 24), the siblings, now 21 and 19, respectively, have set the bar dizzyingly high even by their own lofty standards, and proceed to soar over it into the stratosphere. Listening to this wildly ambitious album is like entering and inhabiting a parallel universe.

Go to School’s subtitle is A Musical, and that turns out to be an accurate description of the 15-song extravaganza, which tells the tale of the pure-of-heart chimpanzee Shane, who’s adopted by a childless couple—played by the brothers’ musical hero Todd Rundgren and their mom, Susan Hall—and raised as a human boy. Michael describes Go to School as “a fairy tale with a dark edge,” as Shane is ostracized, bullied and rejected by the girl he falls for, erupts in an extreme act of retribution for being robbed of his innocence. The libretto is played out in a series of intricate, wildly eclectic musical settings ranging from spot-on throwback rockers to traditional Broadway-style production numbers.

“We had enough songs to work on a straight-pop, more obviously autobiographical album—which didn’t feel like much of a risk—or this one,” Brian says of the decision-making that set them off in this envelope-ripping direction. “These [Go to School] songs come from the same place our autobiographical songs come from, so we decided to trust our instincts and to really commit to making it a musical.”

Michael continues the thought. “We weren’t gonna do it half-assed—we were gonna do it full-on and not shy away from the concept,” he says. “For me, it felt completely like the obvious thing to do, which sounds ridiculous, but everything about it is more advanced to me, and further along. What I think would be really disappointing for our most dedicated fans is if we just did a straight-pop album next.”

For Brian and Michael, working in the musical-theater mode wasn’t that big a stretch, because both had been child actors. Along with the brothers’ roles in TV series, Brian had appeared in a Broadway production of The Little Mermaid, while Michael performed in Coast of Utopia and All My Sons. “We were literally raised on Broadway,” is how Michael puts it.

When the brothers are working on a project, they typically immerse themselves in a handful of albums as a trigger for inspiration. In this instance, they were listening to Rodgers & Hammerstein’s Oklahoma and The King and I, as well as Stephen Sondheim’s A Little Night Music and Assassins.

Brian got through middle school and high school in what he describes as “a comfortable sort of isolation,” adding, “I knew it was probably better to separate myself then become corrupted in some way. And that’s a big part of what the record’s about.”

“When I was going to school,” Michael remembers, “there was so much negativity and so many ignorant people that I’m kind of surprised that I was able to keep it away from me to the extent that I did. So, in that sense, I felt like Shane, and I think we got that angle from our own experiences.”

In creating Go to School, The Lemon Twigs have taken on an immense, multileveled challenge and pulled it off with a degree of insightfulness and sophistication far beyond their years. The challenge now falls on listeners to willingly suspend their disbelief and join Brian and Michael D’Addario on this unprecedented musical fantasia, which takes us to the heart and soul of present-day reality. 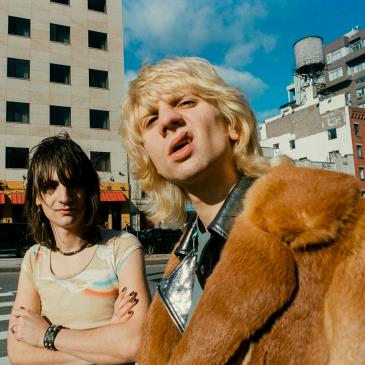