Tickets may be available at the door

Hope. Warmth. Companionship. Few things in this world can conjure up such sensations quite like the sight of a glowing lantern in a darkened window.

“The glowing lantern is a universal symbol for sanctuary,” says Mother Hips co-founder Tim Bluhm. “That’s what we wanted this album to be: a warm safe place to get in out of the dark cold night.”

Written and recorded through the heart of the COVID-19 pandemic, Glowing Lantern is indeed a work of great comfort, even as it grapples with the profound anxiety of these troubling and uncertain times. The songs here are weighty, abstract ruminations wrapped in unflagging optimism, bittersweet streams of consciousness delivered with a jaunty confidence in better days to come. Bluhm and fellow co-founder Greg Loiacono produced the album themselves, and the juxtaposition of darkness and light in their stark lyrics and buoyant arrangements reflect a tension familiar to anyone who’s ever struggled to find their footing or make sense of the inexplicable. At the heart of it all, though, is a distinct sense of camaraderie, a feeling of closeness and brotherhood that the band has ironically only come to rediscover as a result of the past year of isolation and lockdowns. Glowing Lantern is as collaborative a record as The Mother Hips have ever made, and it’s impossible not to feel the joy, gratitude, and friendship radiating out of it like a beacon in the night.

“In some ways, making this record brought us right back to the early days when Tim and I used to live together,” says Loiacono. “It brought us back to the roots of what this band was all about.”

Founded nearly 30 years ago while Bluhm and Loiacono were still just students at Chico State, The Mother Hips caught their first big break before they’d even graduated from college, when legendary producer and industry icon Rick Rubin signed the band to his American Recordings label. In the decades to come, the group would go on to release ten critically acclaimed studio albums and cement themselves as architects of a new breed of California rock and soul, one equally informed by the breezy harmonies of the Beach Boys, the funky roots of The Band, and the psychedelic Americana of Buffalo Springfield. Hailed by the San Francisco Chronicle as “one of the Bay Area’s most beloved live outfits,” the group’s headline and festival performances became the stuff of legend and helped earn them dates with everyone from Johnny Cash and Wilco to Lucinda Williams and The Black Crowes. Rolling Stone called the band “divinely inspired,” while Pitchfork praised their “rootsy mix of 70’s rock and power pop,” and The New Yorker lauded their ability to “sing it sweet and play it dirty.”

From the Santa Cruz mountains in California, Wolf Jett will make you dance, sing, and probably even howl! Their roots run deep into the soul and help you heal from the heaviness of life. The bands sound is a celebration of perseverance, infusing folk, blues, americana and soul into what can only be described as "Cosmic Mountain Music.”

+ LIVE BURLESQUE SHOW at intermission in the garden 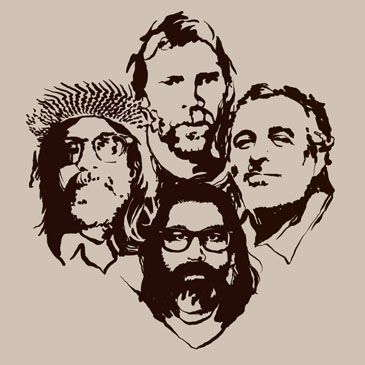