Grill Ticket Includes: Admission, something from the grill and a house beer! HopMonk will be firing up the grill and serving burgers, dogs, or portobello with a choice of potato salad or veggies.
(Grill price includes tax)

All Ages/ Under 3 Free

Free range Folk from Sonoma County
The Musers are Megan McLaughlin and Anita Bear Sandwina both Multi-instrumentalists and award winning song-writers, accompanied by Tom Kuhn on stand up Bass. They make joyful music where ever they go. Sometimes with a dirty groove, sometimes with tender acoustic sensibility. Either way they deliver their hand crafted songs with a sister-like harmony blend and heart felt sass.

Kevin Russell is a multi-instrumentalist, singer and songwriter. He performs regularly in the country rock/Americana band, The Rhythm Rangers and with the bluegrass/Americana group, Under the Radar. He also performs occasionally with the  Americana group, Laughing Gravy and with an eclectic and ever-changing group of acoustic players known as Kevin Russell & his So Called Friends. In addition, he hosts Sonoma County music concerts by various touring musicians (Radney Foster, Jim Hurst, Kathy Kallick, Laurie Lewis, Mike Dowling & many others) and is the driving force behind The Sebastopol Guitar Festival, held in early February. He has appeared as a sideman on 21 local recordings by songwriters & groups, has recorded five CD's with his various bands and has five CD's out under his name. His newest project, an all acoustic bluegrass collection called Plain Dirt Fashion, came out in January 2014. He is a former DJ and writes CD reviews for the online website Freight Train Boogie. com.
And, lastly, Kevin has performed as a side player for a number of local songwriters, including Michael Capella, Mark McLay, Teresa Tudury, Doug Jayne, Audrey Auld, Greg Abel, Greg Scherer & more. 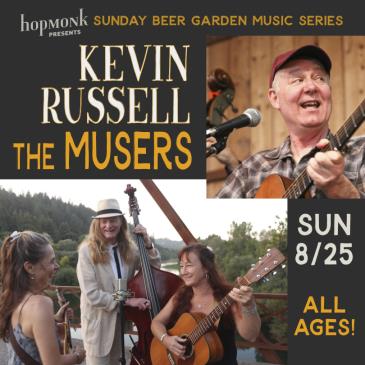