The Pink Stones deliver a full serving of Peach State picked country-rock from Athens, Georgiawith the release of their debut album, Introducing… The Pink Stones, via the New West Recordsimprint Normaltown Records. Mixing elements of classic cosmic country, raucous rock’n’rolland fresh humor and heartaches, The Pink Stones are authoring a new chapter in the annals ofCosmic American Music.The journey to the Pink Stones debut album began in 2015, when freshman college-student andthen punk rocker Hunter Pinkston bought a special single by one of his favorite bands. “It wasthe song ‘Brass Buttons,’ Pinkston says. “One side was The Lemonheads and the other was GramParsons’ original version. I bought it because I was a Lemonheads fan, but I flipped it over andthat was the one of the first times I’d heard Gram Parsons. I was like, ‘Oh shit! I didn't know Iliked country until right now.’”Inspired by his discovery, Pinkston not only began tracking down and listening to Parsons’catalog, but took the well-travel music fan path of seeking out similar artists and influences. Itwas actually a landscape he’d seen before but paid little attention to.“When I was a kid my mom liked country music but my dad was totally a rocker,” Pinkston says.“They would constantly be switching the radio. I was definitely with my dad and had discountedcountry forever. Then it caught up with me and I became pretty much obsessed with it.”A native of Albany, Georgia, Pinkston grew up in a family of music fans with two sisters whoplayed guitar and a father who lived the rock’n’roll life as a young man. “Dad was a drummer insome local, South Georgia bands during the 70s. He opened for the Allman Brothers and othersand continued to be a big fan after he quit playing.”Pinkston began forming his own bands in high school and gravitated toward punk and hardcoreuntil his B-side epiphany. “When I started revisiting what I had heard as a kid that's when Istarted writing my own songs. I really started listening to Neil Young which was music I hadheard as a kid, but didn't really think twice about it at the time.”Pinkston’s exploration of musical styles and maturity as a songwriter accelerated in 2016 whenhe transferred to the University of Georgia Music Business program and found himselfimmersed in the vital and diverse Athens music scene.“I was flirting with country and country rock for a couple of years when I moved to Athens,”Pinkston says. “Once I got here, I had a one bedroom apartment, I worked at a coffee shop, wentto school, but other than that, I didn't do much. I was still too young to go to bars, so I woulddeep dive into music on the Internet. Also, Americana and country-tinged rock is very strong inAthens, so moving here definitely opened my mind more.”Pinkston also began meeting the musicians — Will Anderson, Logan Brammer, Adam Wayton,and Jack Colclough — who would form the core of The Pink Stones. “At first I was playing mynew material with people I’d played hardcore with,” Pinkston says. “As they started to fall out,new people fell into place. Will, Logan, and Adam were all in the music business program withme, and Jack was playing drums in another band that we share members with and started fillingin when our first drummer quit."The final Pink Stone, steel guitarist John Neff, also began his tenure as a fill-in when he sat in onpedal steel for a few shows and decided to stay. A founding member of Drive-By Truckers, Neffis a long-time veteran of the Athens music scene and has brought his experience and a sense oflegacy to the group.The mix of pedigree influences, musical experience, and fresh perspectives have paid off in thetracks of the The Pink Stones first album, Introducing.. The Pink Stones. Recorded at Athens'renowned Chase Park Transduction Studios and produced by Henry Barbe (Drive-By Truckers,Deerhunter) and The Pink Stones, it’s a platter full of organically grown Cosmic American Musicdeveloped from both classic and fresh stains of indie rock, country, folk and more.The proof of The Pink Stones’ success as musical geneticists is evident in the melodic andpsychedelic swirl of the album’s opener and first single, “Blueberry Dream”; the wistfulromanticism of “Put Me On”; the darkly comic take on love and obsession, “Shiny Bone” and theclassic honky tonk giddy-up of “Barroom Blues.”Especially notable is The Pink Stones’ ability to intertwine joy, heartache and self-deprecatinghumor in songs. It’s a classic hat trick of country music that is all too easy to overplay and seemforced by modern Americana aspirants, but one which the Pink Stones craft perfectly with thealbum’s third single, “Love Me Hardly.”The end product is a fresh and exciting album from a great band. It’s an achievement thatrequires hard work but also a willingness to trust your instincts as Pinkston admits.“When I first started working on my own songs I was going to do the singer-songwriter thing,”Pinkston says. “I'd like to say I had a plan in place for everything, but when I started meetingand playing with these dudes, it altered my course. By the time we were ready to make therecord I made it clear I'm not the singer-songwriter and the rest are just a backing band -- we'rea group that plays and creates music together.


A journeyman musician, Mac Leaphart has filled his award-winning career with a mix of hook-heavy roots music, honky-tonk rock & roll, and sharply-detailed songwriting. It’s a sound that finds the Nashville-based troubadour nodding to those who've come before him — John Prine, Guy Clark, Billy Joe Shaver, Hayes Carll — while also pushing forward into uncharted territory, earning support from a cross-country spread of folk fans and Americana audiences along the way.

Before earning his stripes as a road warrior, Leaphart launched his career in South Carolina, balancing a nighttime gig as a bartender with a steadily-increasing stream of shows and the release of his first solo album, Line, Rope, Etc. Leaphart later took his signature sound with him to Nashville where he launched a popular recurring songwriter's night, Southpaw Social Club, and strengthened his own writing chops, penning songs for other artists' albums as well as his own. His sophomore album, Low in the Saddle, Long in the Tooth, arrived in 2015, followed by the EP Lightning Bob in 2018, the same year Leaphart was named was named a winner of the prestigious Grassy Hill Kerrville New Folk Competition.

Music City Joke, released in February 2021, is Mac Leaphart at his very best: wry, rugged, and recharged, singing songs that conjure up memories of front porches, honky tonks, heartbreaks, and dive bars. Songs like "Division Street" and the two-stepping title track are salty sketches of Nashville life, while "Every Day" finds Leaphart in family-man mode, painting a picture of his wife's day-to-day routine. “That Train” continues to showcase Leaphart’s signature style, combining twang and tightly-constructed lyrics into one clever package. Hints of an old-school southern rock influence abound on the album, but no other track shines a spotlight on this as brightly as the rollicking “Honey, Shake!”, an accessible dance tune hiding a deeper, and perhaps very relatable, message about last-ditch efforts to save a struggling relationship.

Produced by Brad Jones (Hayes Carll), Music City Joke is a rallying cry from an artist who has spent more than a decade paying his dues and whittling his craft, joined by a team of longtime Nashville staples, including Fats Kaplin, Will Kimbrough, and Matt Menefee as the soundtrack to his lyric-driven, story-based songwriting. 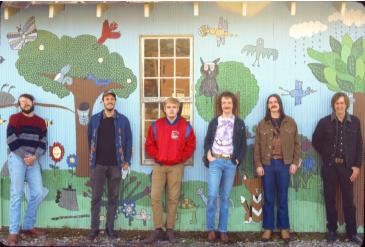