Two-time BMA nominee's The Reverend Peyton's Big Damn Band are the greatest front-porch blues band in the world. They are led by Reverend Peyton, who most consider to be the premier finger picker playing today. He has earned a reputation as both a singularly compelling performer and a persuasive evangelist for the rootsy, country blues styles that captured his imagination early in life and inspired him and his band to make pilgrimages to Clarksdale, Mississippi to study under such blues masters as T-Model Ford, Robert Belfour and David “Honeyboy” Edwards. Now The Big Damn Band is back with a new record Dance Songs For Hard Times that debuted at #1 on the Billboard and iTunes Blues Charts and was produced by Vance Powell (Jack White, Chris Stapleton). Their cord is critically acclaimed by Rolling Stone, Relix, Popmatters, Guitar World, American Songwriter, No Depression, Glide, Wide Open Country,Paste, American Blues Scene and many more!

Eddie 9V has acted on instinct all his life. At the age of 15, this longtime soul artist turned away from the path of college and jobs to go all guns blazing on the roots and blues circuit of his native Atlanta,Georgia. Flash forward to 2019, and for his debut album, Left My Soul In Memphis, the prodigious multi-instrumentalist simply turned on the amps in his double-wide trailer and teamed up with his brother/co-writer/producer, Lane Kelly, to put one of the breakout releases of the year, hailed by Rock &Blues Muse as "fresh and life-affirming".

Now, released in 2021 on Ruf Records, Little Black Flies is the 25-year-old's most impulsive move yet. Recorded live at Atlanta's Echo Deco Studios through November 2020, again with Lane at the helm, plus a who's who of the state's best musicians, it’s an album that Eddie planned to feel like it’s unfolding right in front of you – right down to the clink of bottles and loose studio banter. “I’ve seen a trend in modern recording,” he says. “There’s no soul. I took inspiration from Albert Collins, Otis Rush, Mike Bloomfield. All those great records were done live with their buddies and no overdubs. I wanted the playing to be spot-on – but even if we made a mistake, we kept going.”

Little Black Flies catches everything that went down at a session that felt more like a party, as Eddie leads the lineup through nine new songs – plus three classic covers – that retool the soul-blues genre on his own terms, reminding a new generation why this music hits so hard. Horns blast,drums rattle, slide guitars howl and at the heart of it all is Eddie’s stinging guitar and unmistakable vocal, the bandleader thrilling us one minute with his soul-man holler, then spinning story songs like he’s sat on the next bar stool.

Eddie’s ultimate aim is to pass that spirit on to everyone who hears the record and sees him play live. “It makes my day to please someone after they work all day,” he says. “My job is to make them smile and let the music make them forget – or remember.” 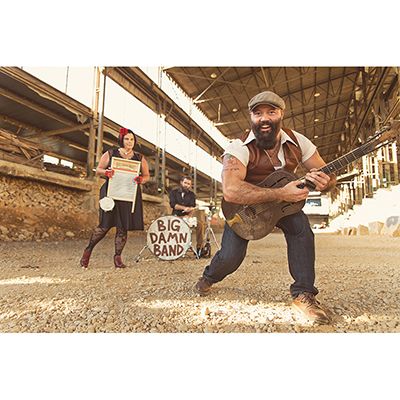