n an era that relies so heavily on quick-hit bands, there are very few things that are truly part of the subculture and not just the passing zeitgeist du jour. Closing in on three decades, The Spits have signified the crossroads between punk mayhem and well-honed songwriting, creating some of the most unhinged and anthemic tracks in underground music while standing tall enough to be uttered in the same breath as names like Jay Reatard, Dead Moon, Ty Segall and more. The Spits are readying their highly anticipated VI, due May 1 via their own Thriftstore Records imprint. Recorded by Erik Nervous on cassette four track, the band’s new LP VI is ten hummable tracks, shrouded in chainsaw punk that mesh the wild showmanship of party-rock legends Van Halen and the leather-clad toughness and songwriting chops of the Misfits. Marking a “return to roots’’ approach for the LP, the band decided to record and write VI in the basements of Kalamazoo and Grand Rapids, Michigan over the course of several spurts of activity, each yielding a few new songs from a terrible drum kit with a literal thrift store guitar. “We’ve only been into an actual studio like three times,” admits Sean Wood. “I don’t think we’ve had one record that was recorded all in one place, this may be the closest thing. And for these songs we’d record a couple tracks, step away and go back at it later– sometimes weeks later. You know, take our time.” Originally from Kalamazoo, Michigan, brothers Sean and Erin Wood formed The Spits with Lance Phelps in 1993 after realizing rock had gone limp, hated partying and just plain wasn’t fun anymore. And even though they didn’t even know how to play, the self-professed deliquents who grew up with New Orleans–style jazz and bluegrass “got cultured” and formed a band dead set on reminding the world how to have a good time. The Spits didn’t fit in with the punks or the garageheads when they landed in Seattle two years later, but carved out their own path with a series of empty open mic nights and parties under a bridge in the University District. Things started snowballing a year or two later with a good word from Mudhoney’s Steve Turner and a reputation for livewire gigs. By the late 90s/early 00s, The Spits were almost as famous for rowdy shows and outrageous costumes as they were for their acid-fried melodic rippers. Releasing five LPs over the next decade-plus, in addition to EPs and 7-inches, the gospel of The Spits spread far and wide, expanding the band’s live legend further and further while giving more fans the chance to hear their uniquely catchy songwriting and punk mayhem. And while several band members have come and gone since their formation, including Wayne Draves and Josh Kramer, The Spits have never lost their edge, never lost their live chops and most importantly, never lost that sense of beer-soaked chaos. The Spits have taken their time on this record and that’s meant a long, cold nine years with no new material. Legions of fans are frothing at the mouth for VI, and clocking in at 17+ minutes, The Spits are back and things are the same as it ever was. Yet this time, the brothers Wood and Co. are adamant about letting the fans know that VI is a return to their roots– more deceptively simple punk from these instigators and legends in their own time. For fans of the band, to-the-point melodicism and good old-fashioned rock ‘n roll, VI isn’t just the name of the Spits’ LP, it’s also the number of instant-classic records in a row.

Technology was meant to be humanity’s tool to combat famine, disease, confusion, and to facilitate life, culture, and innovation. Instead, we’re mired in a digital labyrinth that few care to navigate or even solve. Perhaps it’s not a ruse and the matrices coded by keyboard maestros are a path to liberation, but without querying the constructs we cannot ruminate on their affectations on humanity. VR SEX are audio/visual provocateurs who transpose the identifiers of death rock, synth punk, post-punk, ambient, and ethereal soundscapes into an audit on technology and its imprint on our collective psyche. Comprised of visionary mercenaries Noel Skum (Andrew Clinco of Drab Majesty), Z. Oro (Aaron Montaigne of Antioch Arrow/Heroin/DBC) on vocals and drums, and Mico Frost (Brian Tarney) on synths and electric bass. Their debut tome, Human Traffic Jam, focuses on lyrical themes that probe the possibilities of loss of autonomy through social media, the decline of human interaction, and celebrity favoritism. Skum believes in the stabilization of society and preservation of our planet by reducing its amount of procreators. Through PSRS or Procreation Simulation Reproduction Stimulation, humans can act on their hedonistic desires and not face the responsibilities and consequences that come with being an ill-prepared guardian. The future of our offspring will exist in virtual realms and population growth in turn will be stabilized. VR SEX is the cure to most societal ills. Thematically condensed into an eight song album, Human Traffic Jam was written and demoed by Skum in a flat in Athens, Greece during the winter of 2017. During a rigorous week long session at Figure 8 studios with experimental and dimensional production extraordinaire Ben Greenberg (Uniform/The Men), Skum solely committed all the instrumentation present on Human Traffic Jam. Rather than being emblematic of influences, each song on the LP infuses a dire tension that cuts shimmer with fetid frequencies, never establishing an aural hierarchy or urgency. Instead, we’re lead into punchy capsules of “dour pop”; the balance of saccharine and sour so emblematic of the VR SEX hive mind. 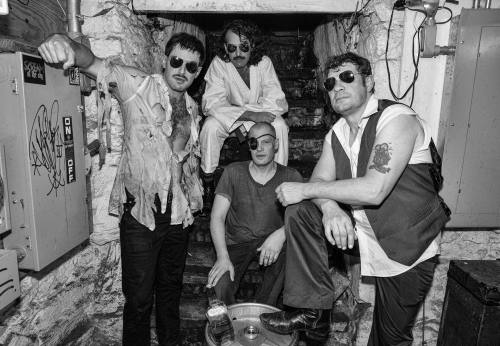