No two bands have affected music more than The Beatles or The Stones. Each opposing force exemplify universal clashing  views making “COME TOGETHER” nothing less than a Miracle! Never before has one band attempted to cover the two greatest catalogs in ROCK in one performance. The Unauthorized Rolling Stones have melded vast musical chakras into one wildly captivating and astonishing treat for any musical palette. Experience "Come Together".

Recognized as the leading Rolling Stones tribute band in the world; quoted again and again from many die hard Rolling Stones fans “The Unauthorized Rolling Stones are better than the real thing”, a favorite among former San Francisco Mayor Gavin Newsom and former Mayor Willie Brown.


ABOUT The Atomic Beatles:
Imagine if Jimmy Page played and arranged the Beatles catalog for Mick Jagger and used Cheap Trick as his backing band. Enter the Atomic Beatles, a revved up inyour face rock n’ roll experience.

Clever arrangements set the tone to your favorite Beatles classics from the Magical Mystery Tour, Helter Skelter, Dear Prudence, Gently Weeps and many more. Let us take you on a magical musical experience! A must see Beatles and Stones show, like none other. 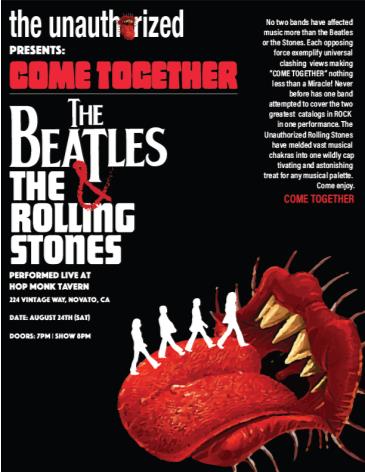