The Unlikely Candidates Indianapolis date at HI-FI has been rescheduled for July 25.  All tickets purchased for the original date will be honored on the rescheduled date. Please direct any questions to boxoffice@mokbpresents.com.  You can follow our ongoing list of affected shows here: http://bit.ly/mokb-hifi-covid19updates

About The Unlikely Candidates:

One listen to The Unlikely Candidates, and it’s clear that the Fort Worth, TX alternative rock mavericks create their own scene. One song vaults from stadium anthem into a piano ballad, while the next twists from syncopated singalong into a contemporary grunge-influenced pop song.

Hailing from Texas, the boys immediately separated themselves since uniting in high school. Breaking from the typical musical traditions associated with the Lone Star State, they turned up with an alternative style of their own. They challenged the status quo and carved out their own niche in Fort Worth. No matter where they are, they’ve clung to a sound that’s simply The Unlikely Candidates.

The band has logged countless miles on the road alongside everyone from Young The Giant, The Dirty Heads, Fall Out Boy, and Brick + Mortar. As they’ve grown as a band, the boys have earned acclaim from the likes of The New York Times, AXS, Esquire, Nylon, Alternative Press, Baeble, and more. Additionally, the band’s music has been featured on Hulu’s Veronica Mars, Showtime’s Ray Donovan, ABC's American Idol, FOX's The Four, NFL's Super Bowl 2018 playoffs, and ESPN's 2018 Indy 500.

The truth is, with steeple-vaulting vocal acrobatics and fiery falsetto’s, combined with heavy-hitting synth melodies, undeniably catchy lyrics, and feel good beats, The Unlikely Candidates’ sound is still too big and bold for any scene.

About The Federal Empire:

The Federal Empire is a Los Angeles based alternative duo made up of Chad Wolf (platinum selling Carolina Liar) and Grammy nominated songwriter, McKay Stevens. In their short career they have amassed over 40 million streams on Spotify including huge collaborations with Martin Garrix and Sam Feldt. Their latest single has already climbed the alternative charts in just a couple short months and their music has been featured in huge shows on Fox, ABC, NBC as well as in the NHL Stanley Cup Playoffs and a number of other sports placements. Their songwriting often includes tongue in cheek lyrics alongside anthemic gang vocals that will leave you singing along for days. 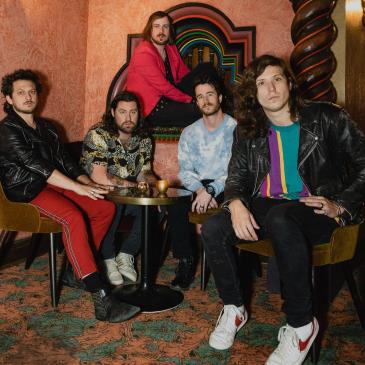