The Winery Dogs
with
Project Rogue


The Winery Dogs
Spotify | Youtube
It’s been, well, a literal dog’s age since the vibrant powerhouse trio known as The Winery Dogs marked their recording territory with new music. But now, following a seven-year break from the studio, The Winery Dogs are back in full force with their aptly named third album III, which is set for release on February 3, 2023 on the band’s Three Dog Music label (via Burnside Distribution/The Orchard) on CD and all digital formats. (A vinyl edition of III will also be forthcoming in just a few months.) III was self-produced by The Winery Dogs and mixed by longtime band associate Jay Ruston. From the clarion call for connection and societal understanding in “Mad World” to the door-opening personal realizations of “Breakthrough” to the undeniable muscle-flexing reign of the white-hot “Pharaoh” and the album-closing energy spillage of “The Red Wine,” all 50-plus minutes of III prove The Winery Dogs haven’t lost a step when it comes to conjuring fresh hooks, gutbucket grooves, and bold harmonies. That said, it’s been a long road back to the collective compound for Winery Dogs guitarist/vocalist Richie Kotzen, bassist/vocalist Billy Sheehan, and drummer/vocalist Mike Portnoy. Back in 2015-16, they hit the road hard together to showcase their mettle as hardcore (you guessed it) road dogs in order to build upon the success of their well-received 2015 sophomore studio effort, Hot Streak, by touring all across the globe. Eventually, the seasoned trio returned to their respective corners to focus on various other projects for the ensuing next few years. But when that live itch needed another scratching, these three working musicians knew just what they had to do. 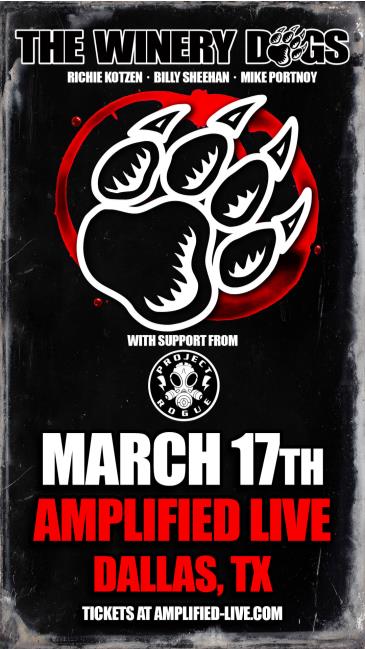