This Friday, CONTROL proudly welcomes electronic legend The FatRat along with APASHE to the Hollywood stage for a high-energy night mixed with sugary-sweet melodies and hard hitting bass music.

TheFatRat is the EDM moniker of Göttingen, Germany's Christian Büttner, who has been active as a producer, songwriter, and engineer since the early 2000s. His music ranges from euphoric progressive house to trap and glitch-hop, with a heavy influence of video game music. He is enormously popular on YouTube, particularly with the gaming community, and has over a million followers. Büttner started using the name TheFatRat in 2011, and his initial tracks were giddy, bass-heavy electro-house. His most popular originals include "Unity," "Time Lapse," and "Monody" (featuring vocalist Laura Brehm). His first major-label EP, Jackpot, was released by Casablanca in late 2016.

Again legend, APASHE, started making breakcore in 2008 before moving onto dubstep, neurofunk, electro and trap. He was the first artist signed to Kannibalen Records in 2011, and in a few years he’s become one of the most exciting and creative acts in the bass music world. His EPs, free downloads and collaborations have garnered support and playtime from an eclectic list of DJs such as Major Lazer, Afrojack, Excision, Flosstradamus & Koan Sound. His trap influenced collaboration ‘Bubble Gun’ with Snails earned him major play time on the BBC airwaves and became the ultimate secret weapon for trap DJs worldwide in late 2012. He followed this up with a monster trap EP called “Black Mythology”, featuring “Black Gold” and “Forsaken” which both rose to the top of the Beatport Hip Hop and Dubstep charts. Make sure not to miss APASHE as he’ll be throwing down a rich, detailed set.

CONTROL is excited to bring The FatRat and APASHE with support from CONTROL resident DJ Jon Mon and FatSince95 to the historic stage for another memorable night in Hollywood. 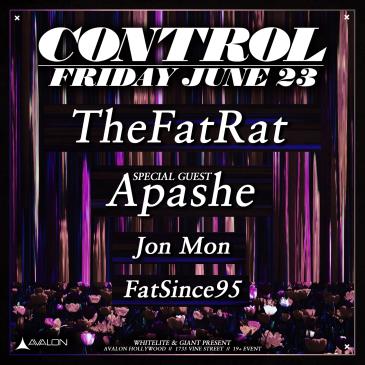