This Week Sucks Tonight is a late night fake news comedy show from Phoenix, AZ hosted by comedians Anwar Newton and Michael Tuner. Each week current events of the week are irrelevantly discussed followed by standup comedy sets from guest comedians who have their sets heckled, roasted, and “punched up” on the fly if the jokes aren’t up to snuff.
It has been featured at High Plains Comedy Festival as well as The Comedy Store in Hollywood and on a weekly basis in Phoenix at Stand Up Live comedy theater.
Please arrive 30 minutes prior to check in to guarantee seating. Seats are subject to be released 15 minutes after the show begins. ALL LINEUPS SUBJECT TO CHANGE WITHOUT NOTICE 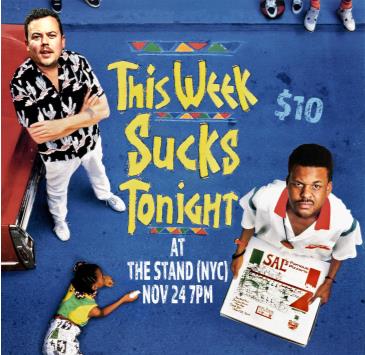