AVALON Hollywood is ecstatic to welcome German DJ and producer Thomas Gold for his first time to our stage, supporting him will be Atomic Mike and Jonney Miles.

Thomas Gold, otherwise known as Frank Thomas Knebel-Janssen, is a German DJ and producer famous for his talent in the realm of Trance, Progressive House, and Tech House. Gold was a mere age of 7 when his interest in electronic music sparked, by the time he was 15, he had bought his first piece, a synthesizer Yamaha DX-11. Since then Gold has signed and released singles on labels like Universal Music, Spinnin’ Records, Armada Music, and Axtone Records, just to name a few. Gold’s music is supported from the likes of Axwell, Steve Angello, Tiësto, David Guetta, and Sander van Doorn. In 2011 he released his single “Alive” with Australian DJ and producer, Dirty South, which was named an Essential New Tune on BBC Radio 1 and it reached number 2 on the Beatport charts.

Atomic Mike is no stranger to AVALON. The Los Angeles resident has made himself a reputation of being the go-to opener and is the master of warming up the room. He’s spun with Kaskade, Darude, and has helped to bring in talent like Tiësto, Ferry Corsten, and Armin van Buuren to LA. First time to the stage is Jonney Miles who is currently touring with Adina Howard, a multi-platinum recording artist.

Saturday, October 7th will be a night not to forget as Thomas Gold makes his AVALON debut, with support from Atomic Mike and Jonney Miles. 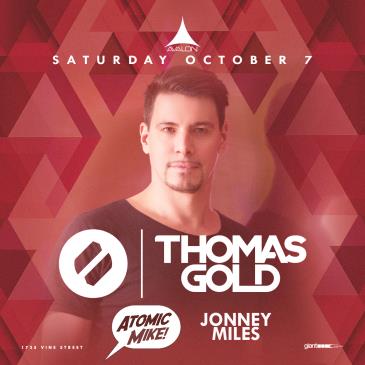