Thousandaire is, from left to right: Andrew Wiggins, Tom Bruno, and Chad LeBlanc from Atlanta, Ga.

They are not fashion models, t-shirt salesmen, poets, activists, charismatic cult leaders, or influencers. They are musicians. They are good at music, not good at "content". Don't expect much of anything besides regular rock and roll at a reasonably high volume.

"Perhaps the most surprising thing about Thousandaire’s self-titled debut was how unassuming it was. Yes, it sounded terrific and it was littered with massive riffs and scaling melodies that lingered in your head. But it was also quite inscrutable. It didn’t yield any grand narratives or wide-arching themes. As a record, it sort of put its head down and chugged along, satisfied to deliver one head-nodding cut after another. All killer, no filler as the expression goes.

Like so many other records, Thousandaire also had the misfortune of landing just as COVID was making its presence felt. Any hopes the band had in promoting the album disappeared in the ensuing wave of lockdowns and pandemic restrictions. And now that shows have become a reality again, there seems to be an urge to move forward and forget the immediate past.

Which is part of what makes new music from Thousandaire so enticing. It’s an opportunity to clean the slate and begin anew. The trio has a new lineup with drummer Tom Bruno taking over for the departed Adam Weisberg. They’ve also been hitting the road some, getting their feet back under them after two years of a forced hiatus.

And now we have the first taste of what’s to come in the form of the new single “Promise.”

Recorded with Damon Moon at Standard Electric Recorders Co., the track finds the band seeking out the sweet spot between swelling post-rock crescendos and fuzz-laden nineties rock. When the song’s central riff finally kicks in, it hits like a slow-motion geyser, bursting with plumes of glass-shattering guitar. Andrew Wiggins’ deadpan vocals do the melodic heavy lifting as he traces the outlines of a relationship built on disappointment and mistrust. “Just cause it’s a promise, doesn’t make the words come true,” he sings on the chorus. At first, it sounds dispassionate—more of an observation than an accusation. But as the music rises and distends, building into a towering crest, the mood becomes more urgent and climactic. Overall it’s a towering effort, another turn-it-to-11 stunner from a band that is elevating their game." - Guillermo Castro - Immersiveatlanta.com

Local/regional favorites Cash Langdon, Bulging, and Mood Room will be joining them! 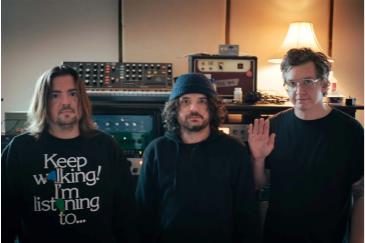