Few things ever grow tall without roots. For the five members of Through The Roots, it took a decade of inspired songwriting and heavy touring to develop the band's unique sound: a modern blend of roots reggae, hip-hop, rock, and electronic pop. It's a sound that nods to the band's diverse influences while also reaching far beyond them, and it began humbly enough, with the guys hosting their own backyard shows in college towns across southern California.

Word spread. Crowds grew. Through The Roots bought a renovated school bus and hit the road hard, graduating from college frat parties to larger clubs, building their audience show by energetic show. Proudly based in San Diego, they also found mentors in Cali-based reggae bands like the Grammy-nominated Rebelution, who began inviting Through The Roots on a series of nationwide tours. Again, word spread and crowds grew. Throughout it all, the band kept writing and exploring new sounds, working their way toward a truly unique sound that blended tradition with technology.

Their identity now fully formed, Through The Roots make their reintroduction with 2019's Arrival, an album that straddles the borders between the band's various influences. This is collective, collaborative music, filled with messages as positive and upbeat as the songs themselves. There are grooves and guitars, melodic hooks and rapped verses, tight bass patterns and gauzy keyboards, digital samples and organic songwriting. From the digital dancehall beats of "Distant Memory" to the spacey wash of synthesizers that kickstarts "Stop the Clock," Arrlval's 13 songs serve as a sort of musical mission statement, shining light on a band of brothers who remain dedicated to evolving and expanding their approach.

Part of that evolution includes working with an outside producer for the first time. Looking for a new perspective, Through the Roots recruited Hawaiian producer Lapana Ieriko, who personally sequenced the bulk of the record's drum parts. The result is a big-hearted album with a digital pulse. "It allowed us to create something we've never made before," says frontman Evan Hawkins. "We're moving away from the grassroots beginnings, diving into samples and utilizing technology, creating a different sound. It's still us, but it's a new, refreshing us."

Years before forming the band, Through The Roots' five members all grew up near the ocean. Hawkins spent his childhood in the north county of San Diego. Drummer Taylor Boatwright grew up in Florida, while lead guitarist Corrick Watson was raised in Oahu, Hawaii. Keyboardist Brady O'Rear and bass player Budda Foster both came from Hawaii, too, having spent their earlier years on the Big Island. When they all met in San Diego, they were five musicians with different backgrounds and mixed musical interests. Together, they dedicated themselves to a common goal: creating their own version of reggae music, one that honored their roots but also pushed through them. The band's name was born, and Through The Roots got to work.

Blending roots reggae, Cali reggae/rock, Hawaiian Islands reggae, electronic sounds, and modern pop into the same mix, Arrival is every bit the grand entrance that its name suggests. It's also a reminder of Through The Roots' drive and dedication. Still a proudly independent band, they've weathered lineup changes and other challenges throughout their decade-plus past. The band's tour bus even burnt to the ground in 2015, while Through The Roots drove through North Carolina on their way to a show in Wilmington. The guys still made it to the show that night, refusing to let another obstacle get in their way of their connection with their fans. Arrival takes much of its strength from that intimate link between the band and the audience, delivering a track list that's as exciting as the group's live show. It's been a long trip to get here, but Though The Roots have officially arrived. They're announced their presence. And they're here to stay. 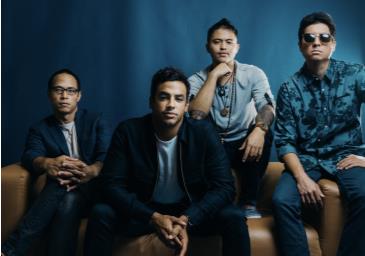