Tragedy: All Metal Tribute to the Bee Gees & Beyond

Born out of the impenetrable divide of Disco and Metal, these fearsome brothers fearlessly obliterated the truce line that had been set in the great Disco/Metal Peace accord of 1977 when they seamlessly blended the two genres with their debut album, We Rock Sweet Balls and Can Do No Wrong – a collection of Bee Gees songs redone in a heavy metal treatment reminiscent of Judas Priest, Motley Crue and Guns N Roses. Since then, they have crisscrossed the globe with their spectacular live shows, storming across the USA, Canada, UK, Ireland, Germany, Netherlands, Belgium, France and Switzerland. On subsequent full length albums, Humbled By Our Greatness, Death To False Disco Metal, The Solo Albums, The Joy of Sex, Tragedy Goes to the Movies and #1 Christmas Holiday Party Mix, Tragedy spread their glittered wings to take on non-Bee Gees classics from the disco era, soft rock anthems and party jams. In 2015, Tragedy broke the internet with a viral video featuring their take on You’re the One That I Want from the Grease soundtrack. In 2017, Tragedy’s video for Stayin’ Alive broke the internet once again. In 2019 two albums hit the NACC Heavy Top 30 charts.

In 2021, Tragedy signed a worldwide record deal with Napalm Records. The first album with Napalm is Disco Balls to the Wall – release date July 30, 2021. It has hit the top 10 in Hard Rock/Metal charts in Europe and the US.

Tragedy takes disco, soft-rock and pop classics, and completely reimagines them as glorious, red-hot heavy metal. Their music is sure to get your head bangin’, your booty shakin’ – and put a smile on your face and your fist in the air.

Tragedy’s concept, while subversive and humorous, goes well beyond what others have done in satirical music – they celebrate the soul of the original song, even while turning the soundscape on its head. The amps are cranked to eleven, but the emotion is not lost. You discover new meaning in songs that have been a part of your life for as long as you can remember. You laugh and cry. Dance and mosh. And feel newly connected to the disco-metal that was inside you all along.

Tragedy does not lazily rely on the concept or “the joke”. The band plunges deep – blazing musicianship, tantalizing riffs and stunning vocals. All except for Lance the towelboy. He’s just an idiot.

Also uniquely “Tragedy” is that they are the only “vocal group” to exist in heavy metal. Everyone in the band sings – trading off lead vocals and creating lush harmonies. It’s as if they’re the Bee Gees of hair metal. Or the Eagles of…LIFE metal! 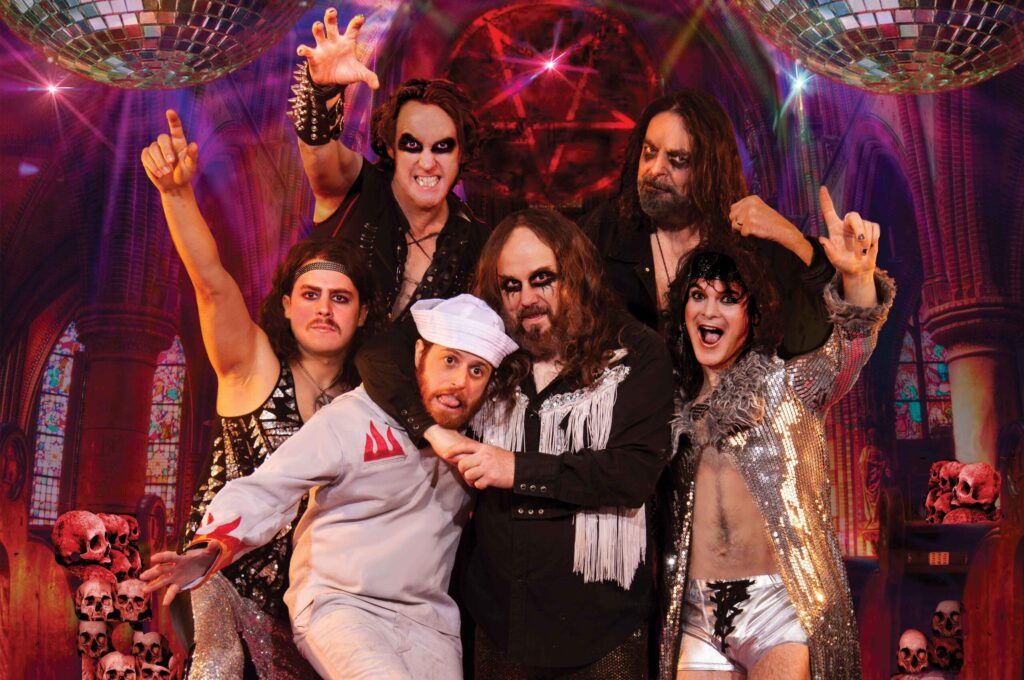 Tragedy: All Metal Tribute to the Bee Gees & Beyond