Join us for the Twin Oaks Back Yard BBQ Series, most Sundays, June through October. Come down to the Twin Oaks Roadhouse and enjoy some Live Music, Fresh Craft Beer, and some top-notch BBQ straight off the grill! There is no finer way to spend a warm Summer afternoon!

Miss Moonshine is a Foot-Stompin' Folk band based out of Sonoma County. Formed in 2014 by frontman Cody Martin, the band began with Cody's dream of bringing a collective of artists together to create a record. Cody brought in six different musicians, and the project quickly evolved into a shared vision: Miss Moonshine.

Now a family with seven diverse musical identities, Miss Moonshine never shies away from expressing each voice. Building on Folk roots, the band presents an eclectic Americana with a craft and flair that has something for everyone!

Miss Moonshine released their self-titled debut album in 2016, and now, the seven seasoned performers are back in the studio working on album two! 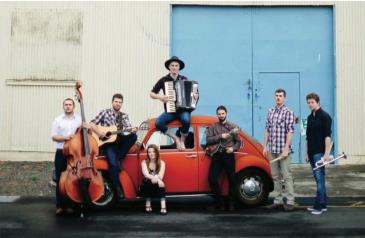