*All attendees must be fully vaccinated and be able to show proof (via card, photo of card, or QR code). Let's keep everyone safe and sound during this return to live music!*

What if the antihero in your favorite film or book had no chance to repent, reconcile, or redeem himself? There’s no victim to rescue. There’s no evil to thwart. There’s no tyranny to turnover. Instead of saving the day against his better judgment, he just walks a Sisyphean circle of existential malaise doomed to repeat yesterday’s vices without the promise of a better tomorrow. Rather than tell this story on the screen or on the page, Uniform tell it on their fourth full-length album, Shame. The trio – Michael Berdan (vocals), Ben Greenberg (guitar, production), and Mike Sharp (drums) – strain struggle through an industrialized mill of grating guitars, warped electronics, war-torn percussion, and demonically catchy vocalizations.

“Thematically, the album is like a classic hard-boiled paperback novel without a case,” says Berdan. “It focuses on the static state of an antihero as he mulls over his life in the interim between major events, just existing in the world. At the time we were making the record, I was reading books by Raymond Chandler, James Ellroy, and Dashiell Hammet and strangely found myself identifying with the internal dialogues of characters like Sam Spade and Philip Marlowe.” https://unifuckingform.com/

To say Portrayal of Guilt write grim songs is an understatement. Since forming in 2017, the Austin trio has been a flowing fountain of fatalism, spewing harsh and brutal sentiments across their releases. Now, on their second album, We Are Always Alone, the band turns the nihilism inwards and explores the notion of eternal isolation. https://portrayalofguilt.com/ 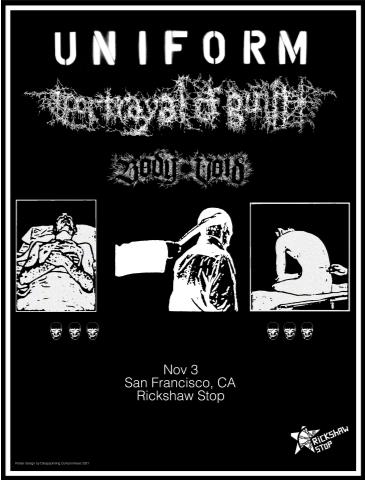