UNCHAINED is an ultimate music tribute to the music and madness of Van Halen. With a wide selection of VH hits and classic DLR era songs combined with dead-on vocals and stage antics, your audience will be mesmerized and engaged. Screaming Eddie Van Halen-style guitar licks and the heaviest rhythm section this side of Hollywood, UNCHAINED has to be seen to be believed. UNCHAINED plays true to fans of classic Van Halen. Get UNCHAINED!

Evolution Eden will be unleashing their new album titled Audio Therapy on March 20, 2020.  This latest self-produced release showcases the group’s maturation as songwriters and musicians, as well as their passion for Rock music. With 14 powerful, hook-filled songs to wet the appetite of all Rock music fans, Audio Therapy has something for everyone.  You want in-your-face hard rockers, check out “The Animal Inside,” and “I’ll Never Love Again.”  Maybe classic rock is your game--then try “Beautiful Disaster,” “Audio Therapy” and “Yesterday’s News.”  Looking for the feel good anthems, check, “Kiss Like Summertime,” and the catchy, “This Is Your Life.” If mid-tempo is more your feel, then “Between Love And Losing You”  will scratch your itch.  You want ballads? Audio Therapy has two killers: the moving “Where Did It Go?” and the dreamy “Man In The Moon.”
With Audio Therapy, Evolution Eden has managed to create a lethal cocktail of Hard Rock, Power Pop and Blues that when mixed together goes down smooth but will definitely give you the buzz you crave. There’s a familiarity to the band’s sound as they clearly draw upon their Classic Rock and Heavy Metal influences, while adding their own touch to make it fresh and distinct.  The band consists of the tag team fronted duo of lead guitarist/vocalist Brandon Owen and rhythm guitarist/vocalist Mike “Pap” Pappas, and the power house rhythm section of bass guitarist/backing vocals Mike McShane, and drummer/backing vocalist Brian Powell. If you are seeking some serious rock and roll that will soothe your soul, some Audio Therapy from the new version of Evolution Eden is sure to be just what the doctor ordered. 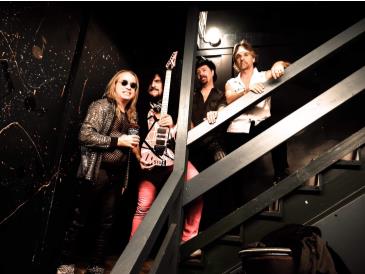