Five acts for the price of one band. It’s a traveling roadshow experience. A set by 4 artists, and then an all-star set at the end. Hosted by Uncle Dave Griffin, founder of the Gram Parsons Guitar Pull and Tribute Festival, and the Swamptown Getdown Music and Arts Festival – both held annually in Waycross.

The four featured acts for the Grant’s Lounge show are Dave Griffin himself, The Pine Box Dwellers, Andy Johnson, and The Page Brothers Band.

Uncle Dave Griffin is a songwriter, published author from Waycross, Georgia. He is the founder of the annual Gram Parsons Guitar Pull and Tribute Festival, and the annual Swamptown Getdown Music and Arts Festival. His original songwriting has landed publishing contracts with The Lowery Group/Bicycle Music Company and has placed him on festival stages, in listening rooms around the southeast, and as the opening act for Leon Russell in 2015.

In 2016 Uncle Dave began writing a weekly blog called “Tail of the Weak,” a series of personal insights and musical memories. A collection of these blogs was published by Aakenbaaken & Kent Publishing in December 2018, called Tails of the Weak: From Doghill to Tripoli and Back.

The Pine Box Dwellers are a roots-rock band comprised of guitarist/vocalist Sean Clark and percussionist/vocalist Connor Griffin. Although the Waycross-based group has been named Band of the Year by the Georgia Country Music Awards, they draw from a wide root system. Swampadelic, Swamp-Stomp, and Swamp-a-Billy and Creepy Country are all attempts at describing this music, but it sounds more like a mix of rust, whiskey, train smoke, ghosts and forsakenness.

True road warriors that have played and will play every stage from the smallest house party to the largest festival, The PBDs tell tales of lust, heartache, horror and unrelinquished love with a veteran savvy and quick-witted cynicism through their two full-length releases, 2017’s self-titled debut, and 2019’s Desperate Days and Longing Nights.

The band slimmed back to its core duo in 2021, which has allowed this already versatile group to make up their own rules. The last year has seen them collaborate with several respectable musicians on a variety of instruments, both live and in the studio.

Several unique, neat projects are in the works, and these guys always have a trick card up their sleeve. Keep up with the madness at www.pineboxdwellers.com.

Their “broody, folksy feel” is an “area favorite”

Andy Johnson is a writer, singer and guitarist from Upson County, Georgia, known as the front man of middle GA band Royal Johnson from 2014-2019. His folk-rock aesthetic, country charm and soulful blues presence have afforded him opportunities to perform at some of the southeast’s most respected venues, and work under the tutelage of some of southern music’s pioneers, such as Hall of Fame Producer Paul Hornsby and R&B guitar legend Robert Lee Coleman. He also won the Atlanta Blues Challenge in consecutive years (2016-2017) as a member of Dos Blues Guys. He has a diverse history, which presently affords him multiple groups with diverse booking options.

Johnson recorded his first solo album Help Yourself at Sky South Studio in 2020, with the guidance of trusted friend Daniel NeSmith (Back City Woods). The record is his most focused release so far, leaning more on his folksy roots, but still with the edginess that has made his previous work stand out. The album is available on all major download and streaming platforms. Physical copies and more information are available at www.AndyJohnsonGeorgiaMusic.com.

After 15 years of developing his countrified, bluesy, soulful voice and guitar playing through thousands of performances in varied configurations around the southeast, Johnson is equipped for nearly any booking situation, acoustic or electric, big group or small group. Johnson also plays guitar and sings for the middle Georgia all-star Allman Brothers Band tribute group The Restless Natives, and occasionally with GA Country Band of the Year, The Pine Box Dwellers.

“The songs on Help Yourself celebrate a dedication to craft and nature while reconciling Andy’s transition to solo artist. A hopeful lightness juxtaposes against an emotional weight as a dizzying stable of central Georgia pickers n’ grinners drive Johnson’s already considerable compositions with the heartbeat of a Saturday night back porch jubilee.”

Born and raised in South Georgia, brothers Dakota and Travis Page use their southern roots and influence to create a sound spanning genres from country and blues to southern rock and soul. It is real and from the heart. In late 2020 they released their debut EP Blood on the Bible Belt, a collection of six songs that share themes of the rough, ramblin’ outlaw life. They are currently in the process of recording a full-length album, playing shows full time and spreading their own brand of southern music. 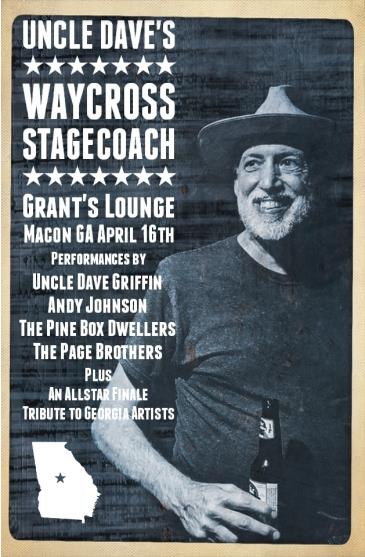 The Pinebox Dwellers / The Page Brothers