Vandoliers are the next wave of Texas music. The six-piece Dallas-Fort Worth group channels all that makes this vast state unique: tradition, modernity, audacity, grit, and—of course—size. Forever puts it all together for an enthralling ride down a fresh Lone Star highway.

One of those mentors is fellow Dallas-Fort Worth musician Rhett Miller of Old 97’s. The influence and tutelage of Miller and his bandmates helped sharpen Vandoliers’ Texas-bred, roots-based punk rock.

“Before the band started diving into the new material, I sent Rhett a bunch of acoustic phone demos,” says Fleming. “Being the amazing person he is, he sent me back a 3,000-word email of advice that read like a master class in the art of songwriting. Beyond their influence musically, they’ve really taken us under their wing, letting us play shows with them and giving us all kinds of advice along the way.”


Nashville-based songwriter Gabe Lee is becoming increasingly known for his ability to detail the intricacies of everyday life, the small distinctions that leave some on the fringe and others in the mainstream, and the particulars that stick around long after a lover leaves.

His second album in as many years, Honky Tonk Hell,  finds Gabe diving deeper into themes that aren’t far from his own life -- exactly what it meant to grow up in Nashville and what it means to still be a songwriter there, how it feels to be settling into adulthood and the monotony and occasional heartbreak it can contain, as well as the pieces of a younger time that didn’t quite work out as expected. But, the way he tells these stories — these common pieces of experiences — is through narratives of men on the run, lovers who leave and vivid imagery, inspired by everything from Biblical stories to forgotten small towns and the people who inhabit them. Adorned with wailing guitars, pedal steel, a B3 organ, an occasional harmonica, dobro and lap steel, Honky Tonk Hell almost seems tailor-made for any dancehall jukebox — but with sentiments that will stick with you for much longer than its initial play.

“Heartbreak doesn’t necessarily have to apply to romantic love but also the relationship between an individual and a community, family, and society,” Gabe says. “In a lot of ways this album is about the relationship of the songwriter to the scene, the thrill and the burden —  the heaven, the hell — and all in between.”

Like his previous release, farmland, the 11-song collection offers hints of his distinct perspective, influenced by a musical childhood -- in which he was surrounded by music, but a particular amalgam of church and gospel, classical music, and NPR radio. One of just a few songwriters of Asian descent in Nashville’s Americana scene, Gabe’s parents immigrated from Taiwan in the early ‘80s to pursue master’s degrees at the University of Arizona. They followed a job to Nashville, where he was raised. His mother, a professional and classically-trained pianist, was an integral force in Gabe’s musical education.

“Emmylou” marks the first time Gabe has recorded a track he’s written on piano. “It’s another heartbreak song,” he says. “It’s about the stage where it seems impossible to get someone out of your head, centering on a man who’s wishing someone back in every waking moment.”

Gabe’s material mixes a deep understanding of his classical training with what he learned at his friends’ homes, where he learned about the greats of the classic rock canon including Creedence Clearwater Revival, Fleetwood Mac and Bob Dylan. There are hints of his adolescent favorites including Nirvana and Bright Eyes weaved in, as well. It’s a varied set.

The lead single from the new album, its namesake, “Honky Tonk Hell,” is a rollicking co-write between Gabe and southern rock wunderkind Marcus King, that began as the two discussed Nashville, specifically the elements of Lower Broadway — bars named after country stars row after row, music blaring out every window, the debauchery that can take place. It's an ode to the ramblin' man aesthetic, centering around a troublemaker and his perception of modern country music.

“Susannah” follows suit with the southern rock influence of Creedence Clearwater Revival, the Rolling Stones or Lynyrd Skynyrd. The narrator exists in a love/hate relationship with Susannah — either a horse, or maybe a truck, Gabe says — because although she is broken down it’s still the only means of escape from a seemingly endless proverbial game of chase with the world, law, god, and whatever it is you may run from.

“Heartbreaker’s Smile” details the way we sometimes glorify the people that hurt us the most. “Shine on, Shine on,” the refrain says, “you can have whatever you like whenever you want.”

“It’s not easy after a falling out to be happy for the other person,” Gabe says. “I don’t think most people are wired that way, but this song touches on the possibility of continuing to love someone you can’t tie down.”

“Babylon” is simply about getting rid of old habits, dealing with motifs of addiction, bad love, and the trials and tribulations of a crooked life. “Piece of Your Heart” is a painfully honest goodbye song, with a narrator who thinks life would be better off if he could just let go of all the memories and mementos of his now-heartbreak.

No stranger to using imagery to tell his stories, “Great Big River” utilizes powerful horns and piano-driven melodies to offer a bit of hope, a cleansing of sorts. “30 Seconds At A Time” presents three separate, indirectly correlated vignettes about the fleeting nature of youth, beauty, and power.

“It also holds some of my favorite imagery on the record, from kids smoking in a train yard, a displaced woman selling magazines on the street, and Jesus catching a lunch break at the diner,” Gabe says. “I wanted this to be a song where a listener can find new and tiny unexpected cracks to mull over every time it’s played.”

“Imogene,” written in the wee hours of the morning, was inspired by a small town that never inherited more than 100 people, but had burned down more than a handful of times.

“As a kid, my parents loved to take detours to wayward rural towns of the Midwest,” Gabe says. “At the time my little brother and I would hop out of the car, take one look, and want to keep going. But thinking back a part of me wishes I’d spent a little more time just living in those moments, imagining stories of what possible dramas or plots could have happened in the farthest corners of America.”

One of the album’s deep tracks, “All Dogs Go To Heaven,” will be particularly relatable to any dog owners. “Being a dog parent, I live the life of chasing down these little hell raisers every day. But at the end of even the longest day, they are my best friends. I think a fun message that came out of it is that we should try to adopt some of the optimism, energy, and good-naturedness of our four-legged companions, even if we sometimes make a mess.”

“Blue Ridge Goodbye” the album’s closer, ventures into a different kind of goodbye than much of the rest of the album. “Without bringing in religion or politics, I wanted to form a message about moving on that was accessible, comforting, and most of all filled with hope.” 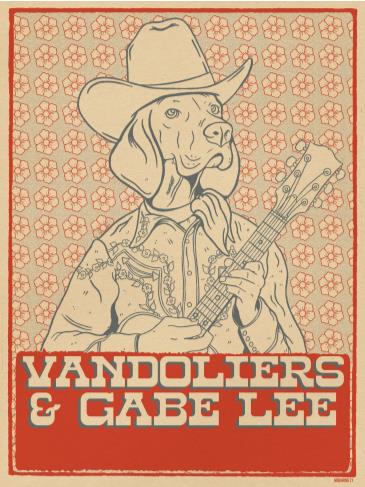