Vanilla is a melodic Indie pop rock band from Tacoma, WA that distills a broad pallet of rock and pop influences into a modern and engaging sound all their own. Their newest album Vanilla|66 is a love letter to 1960’s soundtracks, and their live show features influences from almost every decade of popular music. Vanilla is Jayson Jarmon (guitars, vocals); Sean Gaffney (guitars, vocals); Mark Simmons (bass); Scott Warfield (drums); and Jim Peterson (keyboards). See their entire recorded library athttps://vanilla.bandcamp.com
Strangely Alright are sonic time-travelers. They paint paisley patterned pictures that shimmer with the 60’s mercurial blend of darkness and innocence, they mesh psychedelia and pop melodies together, they run rock muscle through the most danceable of tunes and they are the perfect blend of past and present. Their reference points, early Floyd’s whimsy, later Beatles experimentalism, Bolan-esque strut, as well as later retro-revivalists such as Redd Kross and Jellyfish, might suggest that they spend their time glancing back to past glories. But they are here NOW. A band making music for today. 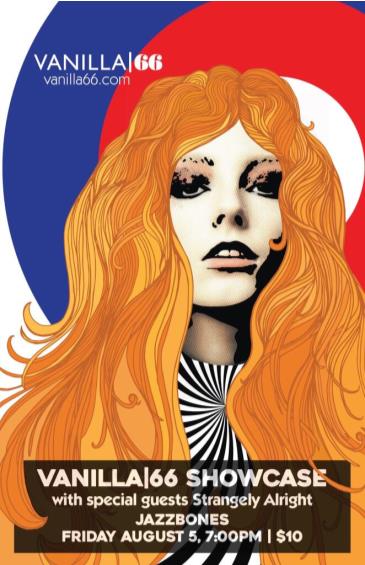