Liza Jane is an emotive young singer-songwriter from Key West, Florida, with a booming, sultry, soulful voice that makes her music vulnerable and powerful at the same time. At the age of 2, Liza Jane told her parents, “I came here to sing”. She began training and competing and has been singing regularly ever since. An award-winning soprano singer-songwriter, Liza Jane has wowed audiences across America and Europe with her phenomenal vocal ability and rock-opera style.
While attending the Classical Voice program at Belmont University in Nashville, Liza Jane simultaneously began composing more confessional alt-pop ballads rooted in her own feelings and experiences. Now residing in Los Angeles, Liza Jane has been releasing works that are more in tune with who she is and what she wants to communicate as an artist. Her debut EP, Unbreakable, speaks to overcoming adversity to break through to the other side of our darkest moments. It takes us through the range of emotions from toxic relationships to our own toxic thoughts and finding the strength to carry on. With this release, Liza Jane shows us that we can all strive to be unbreakable.
https://www.lizajanesmusic.com/

Jesus Axolotl is a solo artist based in Boyle Heights, CA. He began his project of psychedelic/rock/60's sounds in the beginning of 2020 and has then appeared on the Latin Alt radio station (88.5 fm) for an interview/performance. He was also a part of The Paramount LA's 'At Home Sessions' to perform 'The Star Spangled Banner' for Memorial day. Recently he was invited to record at 'Jam In The Van' for a 3 song performance which is scheduled to release early 2022. Currently he is working on a concept album that will be out Summer of 2022. Check out his music on all streaming platforms.
https://www.instagram.com/jesusaxolotl/
Spotify

After releasing her eponymous debut EP in early 2020, Ruby Layne joined forces with some of the strongest musicians Los Angeles has to offer to create Ruby Layne & The Wicked Divine to evolve her sound to match the scope of her upcoming debut album, After the Apocalypse. Ruby Layne’s debut album invokes the sonic tendencies of the classic rock era paired with angsty, new-wave melodies, which are used to lyrically explore a post-apocalyptic scenario and the fears and uncertainties that would accompany it.
https://www.instagram.com/rubylayne 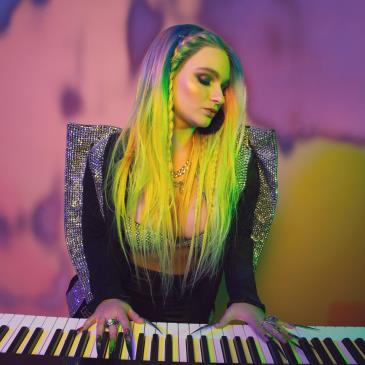