Blissfulness is at the core of Wiseacre, the strikingly purifying sophomore record from Eric Slick. Wiseacre is a location, literally. It’s the place he married the light in his life, Natalie Prass, and titling the record after it is an attempt at bottling the euphoria of his wedding day. The record isn’t just about the joy that comes from a loving existence blossoming out of a new relationship, it’s also about the hard work that it takes to get to that place.

“I’ve always been known as somebody who is on the sidelines,” says Slick, seeking to step out of the shadow of his previous roles. The majority of his time has been behind a drum set, spending the last decade rounding out the industrious outfit Dr. Dog, and as of late, touring as a newlywed alongside his wife. Ironically, the two met on Valentine's Day at a Dr. Dog show before Slick had even joined the band.

Slick’s previous solo work - his debut Palisades, the orchestral Bullfighter, and Out of Habit, a John Fahey inspired EP pedaled as dollar bin ephemera - established the framework for the most significant project of his career thus far.

While with Palisades and Bullfighter Slick mined his subconscious for the moodier and more abstract side of the coin, Wiseacre is a technicolored exaltation. It reads like a novel, sequencing in chronological order the ups and downs of self-acceptance before fully committing to someone else. “Before you get married, you’re going through all the motions in your head,” tells Slick, “Am I worthy of marriage? Do I have the personality for this?” Across 10 songs, Slick artfully sheds these insecurities resulting from fractured relationships (“Over It”), childhood trauma (“Children”), and his parents' own hiccups (“Kind Of Person”). It’s an album about overcoming apprehensions so that he can find solace, not only for himself, but for the person he is now devoted to.

By asking the question, “Why did I think loving you was above me?” on “Haunted”, Slick acknowledges that you don’t have to have a dark cloud hanging over your head to make meaningful art. “You can’t keep up chaos for your whole life, it just doesn’t work. I’ve seen it my whole life with bands that we’ve toured with where it becomes this unsustainable, untenable thing. So yeah, fuck that.” This album comes as a welcomed rejection of the cliche that an artist needs to be a mess in order for their music to hold substance.

After a year of false starts the LP was primarily recorded in a week alongside burgeoning producer Jeremy Ferguson at Nashville’s Battle Tapes Recording. From a rare and custom built Spectrasonics mixing board to just about every guitar pedal imaginable, Ferguson had the tools to inspire moments like the off-kilter guitar solo in “Closer to Heaven”, applying a pedal that starved its own power supply, intermittently shorting it out. “I think it’s just a matter of time before everybody starts recording with him,” predicted Slick, “He’s a genius.”

In addition to efforts made by one of his oldest friends and an indispensable guide for the record, Andy Molholt of Speedy Ortiz & Laser Background, vocal contributions were made by Steven Drozd of The Flaming Lips , the prolific Butch Walker, and a central force in Wiseacre’s DNA, the radiant Natalie Prass offering a shimmering duet on the record’s apex single “Closer to Heaven.” The story behind “Closer to Heaven” stems from a recurring dream of being trapped in a three-story house with the bottom floor representing hell, and the subsequent levels symbolizing purgatory and heaven. Each floor was dotted with the characters from his past, sorted into their respective levels dependent upon their influence on his life. Prass’s voice is like an extended hand, pulling him upward past the destructive faces and into the plane of proverbial Eden.

After a heady first half, the record begins to wind down a bit, blossoming into something prettier. If the start of Wiseacre is peeling away at life’s chaos, the latter half is welcoming the moments of cohesion amongst the chaos, namely, his own wedding. Singing “Tears streaming in the sun, and you are the one,” Slick reflects on when he was left uncontrollably crying as the woman he was about to marry walked down the aisle towards him on the touching track “Someday.” The song continues to ruminate on the couple’s destiny - growing old together, finding joy in each other, and eventually fizzing out with a mind at peace. And as much as that song is about his wife, the most affecting line is a love letter and a gift to everyone important in his life, assuring them “I’ll be in the air with you.” 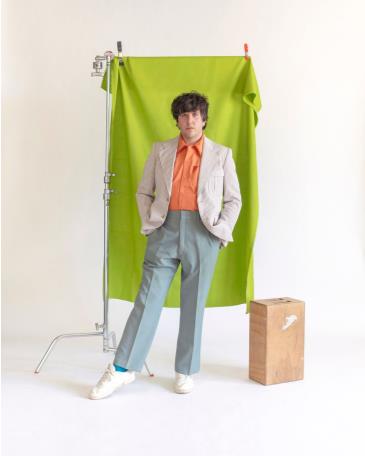