WCL House Concerts with Arthur Thomas and The Funkitorium

While we're still unable to welcome you into our house, we're excited to present another series of WCL House Concerts with a nod to the centuries-old tradition! We've invited some of your favorite artists from the Philly area, many of whom have played our stages countless times over the years, to share their music virtually. These intimate livestream concerts will premiere on our YouTube channel, directly from the artists' homes to yours – except for the final performance by Swift Technique, which will be recorded from The Music Hall at WCL to coincide with our Curbside Beer Fest Pop-Up!

WCL House Concerts will be FREE to watch, but we hope you'll consider making a donation to support independent live music. Click "Add to Cart" to RSVP for a reminder email with the stream link, where you can also make an optional donation of any amount. All donations will be split between the artist and World Cafe Live. World Cafe Live is a nonprofit and all donations are tax-deductible.

The Funkitorium is a band of 6 brothers who all hail from the Planet Funktar to restore order in Earth's world of funk music. “The Funkitorium” was birthed In Philadelphia in March 2019. After a few months of filtering, the band finally found a crew that fit. Those artists are Lead Vocalist “Arthur Thomas,” Vocalist “Re-Mus,” Guitarist “Zavetis,” Bassist “The Jusman,"  Drummer “Chops,” and last but not least DJ “Ndot”.

The Band spent that first year gaining the respect from peers, bloggers, and anyone who claims that they have a love for music. The Funkitorium won multiple accolades and received acclaim from multiple media outlets across the country, even down to receiving a citation from The City Council of Philadelphia thanks to the PHL Live competition sponsored by Councilman David Oh. 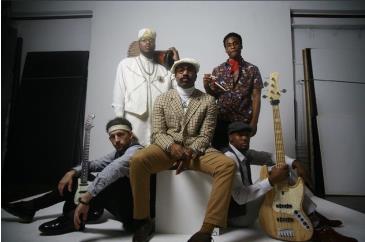 Arthur Thomas and The Funkitorium